Articles
The Voice
From My Perspective – Writing About My Family 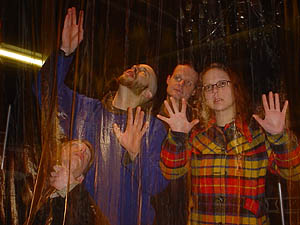 I’ve officially been a grandma for about a week now. When I graduated this past June, 2003, I stated that graduating with my BA was the fifth most important life-altering experience I had ever undergone – after the birth of my four daughters. Well, my graduation has now been bumped to experience number six. The birth of my grandson is on par with (if not superceding) that of my daughters, and my own personal accomplishments of graduation pale in comparison.

However, as much as I’d like to write about the experience, I can’t. My daughter has asked that, out of respect for her privacy, I do not write a Voice article about my grandson’s birth. As her labour coach, I brought along a notebook to record every aspect of this amazing experience. The book itself was a gift from my oldest daughter, entitled, “El Viajero”, or “The Traveller”, very appropriate for a small person who would be travelling a very difficult journey to join us. Every minute, every moment, of that wonderful voyage, is written in the book. But at my daughter’s insistence, the notes I took during that 33 hour journey and beyond will remain accessible to family only.

I can’t say that I blame her. As I mentioned a few weeks ago, privacy concerns and the Internet are something we all need to be far more conscious of. The Internet allows anyone in the world to be privy to our personal affairs. Some people are still flattered to see their names on Internet search engines. The first time it happened to me, I felt the same – but I’ve already reached the point where I dread it. So much potential harm can result from information gathered at random through an Internet information search. I do not want any more information about me or my family spread out there for the world to see.

But I do have another daughter I can write about. She is headed for stardom, so she knows she will have to get used to life in the limelight. Internet fame or Internet infamy is something she is already becoming quite accustomed to. Voice readers who have been around for a while will recognize her – my “Popstar” daughter, Amaya.

She’s about as far from a “Popstar” as anyone can begin to imagine. I’d like to give an update to readers who may be wondering what has happened with her life and career since the Popstar experience last year (conclusion in the Voice March, 2003)

Amaya returned from Toronto energized, and began to actively seek out musicians who were like-minded to form a group. This was not so easy. She placed ads in our local musician’s magazine and fielded dozens of calls. Soon she was actively engaged in auditions and meetings, comparing notes with fellow musicians and trying to get something going. Many people think that its very easy to be a musician. In fact, its incredibly hard work to get a band going. One of the most difficult aspects is that you are required to dedicate so much time and effort into something while receiving no financial return. Countless musicians survive by working low-paying jobs while eking out rehearsal time whenever they can manage it. The dream of a gig that will actually pay is often far in the distance. If you don’t have the support of family and/or friends, the struggle for survival takes all your time and it is impossible to devote yourself to your music. A good number of successful recording artists had significant family money to back them up – otherwise they would never have made it.

With a struggling student for a mother, Amaya is not one of those fortunates. However, I’ve been backing her career in every other way. I have contacts and musical equipment, and I know the business, which has helped.

Last summer, Amaya finally gathered together a band that seemed to click. They called themselves Unfair, and things looked really good. A few promotional (unpaid gigs) followed, but after working and rehearsing month after month, things just didn’t progress. Band members started to drift away, and it became increasingly hard to maintain any kind of dedication. Keeping a bass player was the hardest of all, for some reason, a problem that would continue through several more band incarnations.

Unfair finally fell apart and Amaya went into a slow period. She was trying to write music and remain motivated, but it was discouraging. Finally things again picked up. This time serendipity seemed to play a role. She connected with some musicians that she had met shortly after the whole Popstars experience, and they put together a new group.

This group went through several changes, good and bad, and at one point they were even looking for a new singer when Amaya’s interest began to fade! Several months ago, however, opportunity began to knock. A gig on Edmonton’s southside provided a debut for the group that was now calling itself “Mroim”.

On February 6, Mroim played one of the highest-profile gigs they have done up until now, at Edmonton’s Sidetrack Cafe – the premier venue for live music in this city. They performed as part of a Yamaha-music sponsored Battle of the Bands with Supernova.ca.. They were a last minute addition and did not take advantage of pre-promo, nor did they have the advantage of a huge following, being a relatively new group on the Edmonton music scene. However, they made a decent showing and won the respect of both judges and their peers and won the People’s Choice Award. In fact, the group that won announced that they had no idea how this had occurred since “Mroim” should have been the winner, in their opinion.

This gig seems to have broken the ice, and things are looking up. But its going to be a hard road ahead. Next week they are playing a CD release party as the opening act, and a feature on Edmonton’s A-Channel TV is in the works.

Many of us watch a band or a musician perform on stage and think it seems easy. In reality, that performance is the result of hours and hours of rehearsal and incredibly hard work. When I used to work as a musician, at first I would leave the house and tell my girls that I was going “to play” music. I soon realized that this was misleading. In reality, I was going “to work” at a very challenging, difficult job. Amaya is working very, very hard to be successful at doing what she loves. She has some hard times ahead, but she will make it.

I’m not a huge fan of heavy metal, but it is the music that drives Amaya’s soul. Check her band out and listen to “Finale (live at the Sidetrack)” at: