Articles
The Voice
The Trust of Acrobats 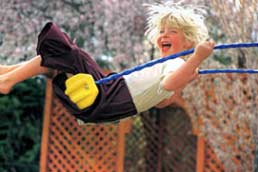 It’s a classic drizzly Sunday afternoon in Vancouver and my six-year-old daughter and I are at Second Beach in Stanley Park. I’m down on the beach picking my way across slippery rocks, thinking about home insurance and tax returns and whether I’ve put enough money into the parking meter. Jessie is walking on the precipice of the sea wall, which is decorated with blue-black mussels and, at this point of the beach, towers about five feet above my head. Suddenly, without warning, she yell’s “Hey, Dad – catch me!”, and in the same instant launches herself toward me. Without thinking, I raise my arms and grab her in mid-flight, directly above my head, my hands about her waist. I step backward to absorb the energy of the flight and lower her gently to the edge of a tide pool. She’s laughing so hard – with the exhilaration of the leap and the look of stunned surprise on my face – that she can barely catch her breath. For a moment I’m angry – I want to warn, to scold, to discipline. This is not funny. What if I hadn’t reacted in time? What if you had gone sailing over my head and landed on barnacled rocks? I want to catalogue the dangers: broken bones, torn skin, dislocated limbs, fractured skull.

Something stops me, though. Perhaps it’s the fact that this spontaneous act of recklessness is so atypical of her behaviour. It is true that she has never been afraid to climb trees or balance on logs, has never been daunted by bicycles or scooters. But always she has approached these things with a degree of measured care. She has watched others go first, has asked questions, has estimated distances and generally demonstrated an awareness of her own physical limitations that has seemed to me to display a wisdom at least a little beyond her years. Perhaps, also, my reluctance to dish out another standard parental lecture is due to the fact that it feels so wrong to extinguish a moment of such pure joy. I’m just not sure that any of us enjoy quite enough of them in any one day. But mostly I think what caused me to keep my great trap shut had something to do with trust.

It seems to me that for quite some time the concept of trust has fallen into the same general compartment as superstition – an ignorant and unrealistic way of seeing the world. As the routine horror of newspaper reports and TV coverage continually remind us, danger is everywhere. “Make sure you meet him in a crowded place” we tell our single friends. “Don’t give out your number”. There are terrorists and tricksters. There are deadly predators driving taxicabs and ice cream vans. Naturally we shake our heads in astonished dismay that, in this day and age (“in this day and age, mind you Martha!”), it is still possible for poor guileless souls to be preyed upon by the unscrupulous and the evil, to be lured into dodgy investment opportunities and darkened alleyways, to be talked out of their savings, their houses, their very lives. The park is not safe after dark. Hitchhiking should be illegal. Have you seen the youth gangs at the Skytrain station? It is, of course, the purest lunacy to allow one’s children to share a smile or a passing remark with an old man weeding his flower bed. As every six year-old in a darkened bedroom at one time suspects, there are goblins in the wainscotting and trolls in the attic.

Nor is our suspicion restricted just to the potential (probable?) unkindness of strangers. Who among us, after mad cow and Walkerton and West Nile, does not fearfully poke their sausages around their plate or suspiciously sniff their glass of drinking water or steer clear of the mosquito-infested woods. We are anxious and, many would say, rightly so. No one can deny that the universe fairly bristles with random calamities. One would have to be blind to not see the planes falling from the sky or deaf to ignore the howling of the dogs in the woods beyond the perimeters of our gated communities.

Like most parents, there is a big part of me that wants to keep my daughter safe from all harm, that wants to wrap her up in the jeweller’s cotton of caution and watchfulness. There is, we are told, a heavy price to be paid for not being vigilant.

Every once in a while, though, we see things differently. Hope triumphs over our own, or the world’s, experience. Perhaps it’s a moment when buy a motorcycle and air it out on the highway, feeling the slow tug of the curves. Perhaps it’s leaping out of an airplane or falling in love again or going back to school in middle age. Perhaps, at these moments, we are most like acrobats defying gravity, or flying six-years-olds, filled with wonder and trust.