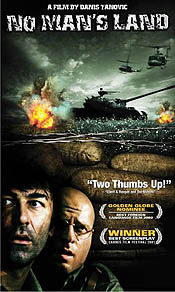 This is a true gripper. I was mightily impressed with this film from France. The setting is a trench during the Bosnian War, where a Serb and a Bosnian soldier are mistakenly stuck. What makes this so special is the incredible language from all the players. The writing is amazing. The people in all roles seem so incredibly natural. No Hollywood faces to recognize and somehow they would be horribly inappropriate here.

The languages include, (take a breath here everyone!) French, German, English, Bosnian, and Serbian. Each plays an incredible role in the film. The Serbian soldiers get shot up but so do the Bosnians. Each soldier blames the other for starting the war: for burning his villages down. While the Serbs are passed out from the rally of shots one of them is carefully placed onto a “bouncing” land mine. It is invented by one of the Serbs, or at least, so he claims. When Tsera, the one on the mine, wakes up he isn’t allowed to move, because he’ll blow up. Eventually the Bosnian is told to diffuse it. That’s a bit of a problem because Nino is new to the unit and his superior, who planted the bomb, told him nothing before the Serbs shot him.

Tchiki, (pronounced Chickie) Tsera’s buddy, is furious and has a temper problem. But he has a cool Rolling Stone t-shirt on -until he gets his blood all over it. His temper gets everyone into more and more trouble. Hilariously Nino the Bosnian, is in control of the rifle. Then, wait a minute, Tsera has it. Then both of them have their guns! This gets funnier and more frustrating every minute. It is an amazing look into the world of the totally annoying world of war and at times is so comic it makes you double up. Every time you imagine there isn’t another problem that could be added to their difficulties -surprise”?yes there is.

I would be delighted to tell you who was who in this film but again I can only tell you names and what I do know. Branko Djuric plays the Bosnian, Nino I presume. (I think his first name is so cool!) The second name available is the Serbian, (Tchiki I guess) who is played by Rene Bitorajac. I found myself wondering if France is cranking out all these incredible films that I’m just not seeing. Are you? I have been discovering a world of films from France that are amazing. This one deservedly won the Best Foreign Film Oscar.

My number one problem with this film is the annoying honesty of the filmmakers. They have the truth of the red tape and politics of war down pat. I hate that! The reporters, the command personnel, and each side are very annoying. The ending BITES! It is amazing. It is probably too accurate for words, but still, it bites. And I won’t tell you what it is.

Worse than the honesty is the damn subtitles for the translations of the many languages. Oh I know I’ve nagged about so many people hate subtitles but when you can’t read them because the background is lighter than the titles at points THAT bites even more!

This film is now running on cable in Alberta. Ten thumbs up!