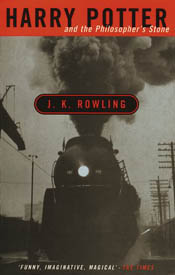 By now you probably know that the first book in the series is also a popular movie. But you might want to know what the children you love are reading! No, I’m not going to be like those religious people in the deep American.south telling you this is all devil worship and that kids are being corrupted, but I do think as adults you should know what the kids are reading so you can deal with any innocently confused or worried questions.

There are a number of brilliantly written characters in this book. J.K. Rowling has brought children back to reading in droves! God bless her. I know of many tiny children who can now out read adults, so many of us had better start catching up. This book is worth it for all age groups!

The book opens with the world of little Harry Potter who is about to turn 11 years old. He lives with cruel Aunt Petunia, her husband, Uncle Vernon and their horrible piggy-like son, Dudley. Together they are the Dursleys. They are all the worst! This book is the magical retelling of the Cinderella story, but written so well you couldn’t care less about analysis.

Harry Potter, if you don’t know by now, has a scar on his forehead. We find out he got this scar as a baby when the magical bad guy known as “you-know-who” killed his parents. All in the magic world know no one is to use Lord Voldemort’s name. Oops! Of course Harry has been spoon-fed a nice little fable about his parents being killed in a car crash. Since he is treated worse than rubbish by his aunt and uncle we soon realize this has got to be nonsense.

As Harry’s birthday approaches an owl appears. He tries again and again to get the letter he holds to Harry. Since Uncle Vernon is scared to death the world will find out he has a magical child in his house he expressly forbids Harry to do nasty things like talk to snakes. Too late, Harry finds out he has that ability.

After hundreds of letters are snatched away from Harry’s clutches, Uncle Vernon packs everyone up and hurries away”?anywhere. It isn’t far enough though and a giant named Hagrid tracks Harry down, smashes through the door and wishes him “Happy Birthday.” This giant easily deals with the “Muggles” (anyone who doesn’t have magical power, which Hagrid informs Harry he has). Harry is invited to go to the prestigious school, Hogwarts, and this is what the letters are about.

Harry is taken to purchase some school supplies, which can only be found in Diagon Alley. The supplies are paid for by the secret and rather large funds left to Harry by his dead parents. The money is kept in Gringotts. It’s the bank that the witching world uses! Cash is plentiful, but must be used for all the years Harry needs to train at school, so he can’t get too crazy with it.

At the train he needs to catch to get to Hogwarts he has to find platform 93/4. It can only be reached by going through the specific pillar that separates platforms 9 and 10 at exactly the right time and in the right manner. Since Harry is new to this it is a bit of a nuisance, but certainly a good giggle.

Harry soon meets up with a number of students at school and connects to Hagrid again, who is the groundskeeper at Hogwarts. He is a gentle soul and maybe not as completely tough as his size might suggest.

At school Harry meets other students. There’s Hermione, a child raised in the Muggle world like Harry. She is a complete nerd. She wants to know every answer and studies like a demon”?ooops –Witch! Ron is a redheaded kid who, like Harry, has had to deal with hand-me-downs all his life. His, however, are magical hand-me-downs. Of course there are the bad guys on the team too. There’s Malfoy, the brat whose father’s “someone” in the Ministry for Magic. Shame he’s got money, power and no manners. He always wants to give Harry a hard time.
As far as teachers go there are some tough but fair people on board, like Professor McGonagall who can turn herself into a cat. Then there are the rats on staff, like Professor Snape, who is insulting, snide and unfair.

The school is headed by the greatest wizard of our times, Dumbledore.

Of course someone is trying to kill Harry: who is it in the cast of characters? I’m not going to tell you. That’s too much information. I want you to have a good excuse to care what your children are reading and sit down with this set of books. (Frankly, it’s so much better than Tolkien I just can’t begin to burble enough about the series!)

I promise you the book is fun and filled with hilarious magical parallels of our world. That’s one area where you need to be able to explain things to the wee ones.

Have fun. Get some hot chocolate and enjoy!

Write Stuff – There’s an App for That

Dear Barb – What to read…