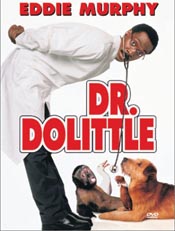 Eddie Murphy isn’t always my cup of tea. Maybe it’s his over-the-top comedy style that sometimes irks me. This film is such an exception. Murphy is relatively low-key in his performance.

We open the film with a young version of John Dolittle, who has a natural ability to speak to animals (hey, some people say they can!) and is pressured by his father, played by Ossie Davis, not to keep it up. Eventually he stops and by adulthood forgets all about his earlier ability.

Eddie grows up to be a medical doctor, and part of a clinic team. There is a bit of trouble with a shellfish addicted patient who repeatedly arrives in a puffy-faced state trying every excuse in the book for her shot from handsome Dr. Dolittle.

There is more trouble with a Calnet takeover bid that keeps butting in on the doctors’ time. Each of the doctors at the clinic has a different view on being paid a stack of money for their company. Oliver Platt is Murphy’s fellow M.D., Mark Weller. Mark admits to being “a very shallow person” and only interested in the 4 million dollars offered by Calnet boss, Dr. Barton Calloway (played by former Young Frankenstein monster, Peter Boyle).

Despite the talents of Murphy and the gang, the real stars of the movie are the animals and the talents of the actors lending their voices to them. At first the script and director are sure to inform us with some animal appearances that Dr. Dolittle has lost his ability to hear the animals as an adult. Then after hitting Lucky the dog out of nowhere Murphy shakes off his minor incident and begins to hear the animals again. At first he thinks this is a smart-ass joke as he listens to pigeons squabbling over bread and garbage during a dockside Calnet meeting. He finally bolts and races up to the house. When his daughter’s guinea pig smart mouths him in his car on the way to the camp, Murphy barely makes it through the guinea pig’s complaints and song and removing a stick from an owl’s wing before fleeing back to the city thinking he’s cracked up. He calls a colleague from the clinic at 1 a.m. and asks him out to “have a drink or a cat scan or something”. The CT Scan comes back just fine and Murphy thinks maybe stress is the culprit.

Some of the voices are easy to recognize and some aren’t. I found Lucky the dog’s voice super simple to identify. It is Saturday Night Live’s Norm MacDonald doing the mutt’s sarcastic comments. I think the rats take the first prize, though, for smarty-pants dialogue.

Other animals join in on the squabble. The owl that Dolittle rescues starts to blab to other members of the forest and soon a full menagerie appears in the city at his door: sheep, pig, ducks, goats, a hen and a couple of penguins! (I won’t argue about penguins in the forest here!) I have to say that the alcoholic monkey is adorable and the brain-clot ridden tiger is stunningly beautiful. The animatronics are well done by Jim Henson’s Creature Shop and a little harder to spot than I expected. The technology just keeps getting more and more believable.

After Dolittle tries to “rescue” the two wise-ass rats in the garbage can during “an emergency” in his clinic, he gets discovered and is signed into the local mental hospital. He is forced to stay there ten days or until he stops thinking he can talk to animals. It’s a close call when Rodney the guinea pig hits the answering machine and starts talking to the doctor on the phone at his house. Dolittle fast talks his way out of the problem to a clinic worker and hangs up on Rodney.

Dolittle is put through a test with an orangutan in the clinic. All he has to do is get the orangutan to answer some questions and make the EEG machine register a response – proving his ability. Except that Murphy flunks. As he’s leaving the room he hears the orangutan say goodbye in Spanish! But it’s too late. Eventually the clinic’s psychiatrist’s cat tells Murphy about the doctor’s pink tutu in the cabinet and Murphy is freed via bribery!

When the tiger, Jake, is getting worse, Murphy decides it’s time for tests and then surgery. He consults with a veterinarian and gets some input. Eventually with the clinic and Calnet team watching Murphy “sneaks” the tiger into the clinic for surgery. Except tigers will be tigers! When Jake sees Maya’s guinea pig, Rodney, crawling around the clinic, he decides the lunch cart has come around and starts after the meal:much to the horror of the crowded room full of people! Eventually the tiger gets his surgery and Dolittle’s father saves his son’s reputation by telling his wife that he didn’t understand John’s gift as a child and shut it off thinking it was best.

Everyone makes it – even the tiger and we get a chance to live happily ever after. The kids will love this one but then – I’m betting so will you!

Saturday Night at the (Old) Movies – The Wearing of the Green