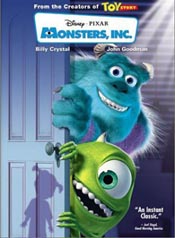 Our last column this month dedicated to films and books for children features this lovely Disney film. As Monster’s Inc. opened I thought, “Holy crap! I think that’ll probably scare some tiny tots!” But trust Disney. Unless your child is a wee small tot who doesn’t understand what’s going on in the dialogue, they’ll soon be back in control and laughing.

Indeed, this film sizzles with hilarious reverse images. Children are afraid that monsters live under the bed, yes, but what do MONSTERS fear? Why, children of course! And a tiny little girl (pre-speech) gets through all the precautions monsters take so children don’t eat them alive and enters the Monster’s world! You see, monsters believe that children have the power to kill them with just one look!

But when monster buddies, Mike (voice of Billy Crystal) and Sully, (voice of John Goodman) try to return the little child to her room, it turns into a hilarious, animated pandemonium. Mike and Sully try to avoid capture from the CDA (Child Detection Agency). To get caught with even a sock attached to your fur by harmless old static means the workers in the plant have to scream out an alarm. The CDA is there in a flash in biohazard suits and we become aware of the true terror these monsters have of all things children: The CDA will grab the offending item with tongs, bolt it under a tent and blow it up! Then the infected monster is shaved, showered and sprayed with monster cleaner.

A commercial tells us why monsters jump out of the closet, hide under the bed and scare children. You see, the power company is run by children’s screams. The motto is “we scare because we care.” The more scares they can trap in their tubes, the more power you can get. And with rolling blackouts expected it is understandable that there is a scare quota that must be met.

Children will be highly entertained with the brilliant Disney technicians’ use of bright colors, original mix-and- match monsters and the silly story line behind it all. I know my husband and I were!

Monsters prepare for the workday by putting in their false scary teeth and extra eyes, and by popping out their quills or armor. But more and more doors between the human world and the monster’s are being destroyed because kids are harder to scare these days! And if they can’t be scared why keep the access door? It is all business at the company. Gotta get those scares to power people’s homes! So the monsters practice their scaring techniques.

One of the problems at the plant is Randal, a chameleon who wants desperately surpass Sully’s scaring quota. He keeps missing by a shade and that annoys him more. Sully is just a natural. Maybe it’s the horns? Maybe the purple spots on his blue fur frighten the children – or maybe it’s his size? I wish I knew.

Eventually the child, nicknamed Boo by Sully, has to be returned to her little room, accessed by doors that are stored in an enormous warehouse. Her door is adorable with its pretty pink flowers. But getting to the door without trouble is tough for Mike and Sully. The key is needed, the door has to be found and they have to make sure they aren’t caught doing the work when they shouldn’t be.

When the company head, Mr. Waternoose is found to be a traitor, Sully has to handle the situation with serious care. So he tricks the boss into zipping into the practice room where we watch dozens of monsters practice their stuff. There is a mechanical child programmed to go through a specific pattern and all actions are taped and replayed on screens. So when Mr. Waternoose is caught confessing in the room – it’s all on film! Of course, the real boss is able to come forward and a “heartbreaking” finale begins. But of course, THIS is Disney:it will turn out perfectly. I just won’t tell you how.

Terrifically funny. Lots of music and amazing effects. How DID they get Sully’s fur to wave in the wind and have snow stick to it!