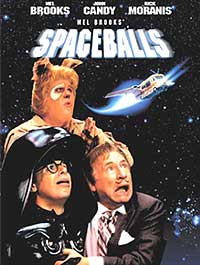 Mel Brooks has a truly hilarious project here. This 1987 PG rated film is far less “mature” than most of Brooks’ campy fare. It begins with the classic Star Wars formula and then branches out into wacky nonsense throughout.

Stars include Bill Pullman as romantic lead Lone Starr (pilot of the flying Winnebago). His sidekick is the late great Canadian funnyman, John Candy (playing Barf the half man/half dog). Lone’s love interest is pretty Daphne Zuniga as the Druish Princess, Vespa. Vespa’s robot assistant is a female with the voice of Joan Rivers. The chief Star Wars take-off character is Pizza the Hutt with the voice of Dom DeLuise, and the wise man, Yogurt, played very convincingly by Mel Brooks. And of course thre is champion funnyman, also Canadian, Rick Moranis as Dark Helmet.

The plot goes like this: Dark Helmet steals Princess Vespa after she takes off in her personal spacecraft to avoid being married to the only eligible prince her father can find. She is a spoiled little brat and wants nothing to do with him. Dark Helmet tractor beams her into his craft and then the King of Druidia (played by dick Van Patten) contacts Lone Starr and Barf and bribes them into reclaiming his daughter. Since they are in deep to Pizza the Hutt, they have to accept the terms or Pizza will have them for dinner!

Along the way there are many hilarious”?though very tame gags. The kids will LOVE the installment in Dark Helmet’s ship when they go the equivalent of Warp Speed and then have to stop. Brooks’ has inserted a hilarious set of gags to make the scene work to the umpteenth degree.

The film is a complete take-off on the Star Wars characters, so it is easy to recognize the plot and therefore the gags are funnier. Special effects are paced well and although some are decidedly low tech (like the “comb the desert” scene,) they still work. Other effects that take off on the Star Wars space moves are still good enough to entertain.

To succeed, the crew must use the magical power of “the Schwartz” to bring peace to the galaxy and settle the problems with Vespa and the evil Dark Helmet. Along the way there is a love interest. No sex is implied or shown – not even a juicy kiss! No worries. There are no scenes of blistering violence or evil creatures that are frightening – Pizza is just hilarious!

Mel has had incredible reviews for this – one of his most respected and best loved films. The Los Angeles Times called it, “Screamingly funny!” Gene Shalit on NBC TV said, “eight trillion on the laugh-meter”. Neither of these reviews is wrong. Every time this film pops up on TV my husband and I wait for certain key scenes and giggle repeatedly. The jokes become loved and quoted. The kids will probably want a copy of this one -so be prepared for repetitions!

In the end they all live happily ever after and the film is a bouncy happy one. I think you’ll like this one too — providing you haven’t lost your best friend or been given a fatal dose of the glooms!