In 1986, while working for the BC Ministry of Forests, some of my co-workers and I were temporarily transferred to the Yukon to help battle the territory’s forest fire Bane. We spent about a week in Dawson City awaiting deployment and a couple of weeks battling a project forest fire near the Yukon-Alaska border. In the summer the population of Dawson City explodes with the influx of tourists arriving to relive a re-creation of the gold-rush culture from the late nineteenth and early twentieth centuries. We found ourselves amidst the throngs and caught up in the excitement and romanticism of the place.

One of the major attractions of Dawson City (of which there are many) is Diamond Tooth Gerties gambling hall (1). I was thrilled to find it, as I’d heard all about it from my best high school buddy Jason Campbell. His mother, Gillian Campbell (2), was, and still is, a well-known entertainer who plays Klondike Kate”?back then in the Yukon, and since then all over the world. One afternoon I found myself playing Blackjack while listening to the tunes of old-time piano; dancing girls plying their trade on the raised stage before the crowds. At that time, Diamond Tooth Gerties was one of the only gambling halls in Canada that was licensed to serve alcohol to clients while they sat at the tables, and I took great advantage of the service. I was soon plastered beyond my ability to see the cards clearly, but I continued playing well into the night. At some point I cashed in my chips and staggered toward my motel room along the dusty road that was lit by the midnight sun. My pockets bulged with $250 more than I’d arrived with. The next day I thought to myself: “If I can win $250 when I’m totally intoxicated, just imaging how much I can win if I stay sober!” Back to the gambling hall I went, but this time I vowed not to drink a drop of alcohol. I kept my bargain with myself and left the hall late that night. I was stone-sober and had $850 less than I’d arrived with (damn debit cards). In 1986 $850 represented two weeks wages for me, but I was a single twenty-one year old and relatively care-free. I’m pretty sure I’ll recover emotionally from that loss any year now.

I’ve learned over the decades that the lure of quick riches is almost always illusory; shiny bars of gold most often turn out to be electro-plated lead. Even so, there is something about glittery things that ignites a passion in the belly of most people, including me. Many of the permanent Yukon residents that I met were infected with gold fever. Over and over I heard people talking about their gold claims: “if I can just raise enough money to work my claim, I’ll be rich.” It was the favorite mantra of the bulldozer operators who worked the project-fire that we would eventually be assigned to. After returning to BC from the Yukon, Bruce Martin and I bought gold-pans and trekked up the Goat River in search of placer gold. We had no luck panning gold, but the trip was a lot of fun.

These days, I still have an interest in Gold, but from the perspective of an investor. I see gold as the only stable currency in today’s volatile economy”?one wracked with the uncertainty of war & terrorism; one where the world’s countries have long abandoned the stability of national currencies grounded in the gold standard; one where national debts of formerly wealthy countries are in the trillions of dollars (3); one where consumers collectively owe more than their net worth; one where governments, such as the United States, intentionally try to undermine their own currencies by printing billions of (worthless) paper dollars so as to gain a trade advantage under globalization; one where governmental monetarist policies no longer work to stimulate economic growth. Unfortunately, many pundits feel as though a major world depression is unavoidable now, and that it will happen sooner than later. US Member of Congress Ron Paul wrote a paper that clearly explains the situation facing the US and the world (4). Should that eventuality come to pass, conventional stock-based investments will be no safer than they were in 1929 & gold may be a safe monetary haven. However, not all gold-related investments are safe. Those who experienced the wild ride of the Bre-X Fraud can attest to that (5). I recommend that those who wish to invest in gold do so through well-diversified and established precious-metals funds (6). 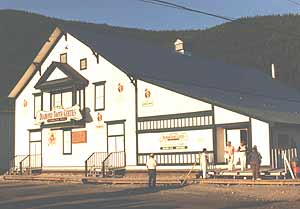 While I’m a far more conservative investor than I was at Diamond Tooth Gerties gambling hall all those years ago, my eye still wanders to the speculative glitter once in a while. When the first reports surfaced regarding the discovery of diamonds in Canada’s Arctic, I was intrigued but not convinced that the reports were bona fide. I often wonder what an investment of a few thousand dollars in pre-production Canadian diamond mines would be worth today. Now Canada has a well-established and well respected Diamond mining sector that is obviously stable and long-term (7).

On August 25, 1998 Canada’s first emerald discovery was made by a geologist of Expatriate Resources in the Yukon Territory. November 22, 2002 a 100% option agreement for the discovery at Regal Ridge was completed between True North Gems Inc. (10) and Expatriate, giving complete ownership of the Regal Ridge emeralds to the former. True North Gems closed its IPO and on November 25, 2002 began trading under the symbol TGX on the TSX Venture Exchange. In addition to the emeralds, in 2003 True North Gems discovered a new variety of aquamarine unique to Canada which it has named the “True Blue” Beryl (8). When first traded publicly, the stock came out at $1.30; it traded at $0.80 on the day of writing this article.

Do these discoveries amount to the nascence of a prosperous new emerald, “True Blue” mining industry in Canada? Or, will it turn out to be another Bre-X style disappointment. I’m not yet convinced either way, but it is an intriguing addition to the ongoing lore of Canadian gold and gems.

Fly on the Wall—Yoga and the Rush to Enlightenment