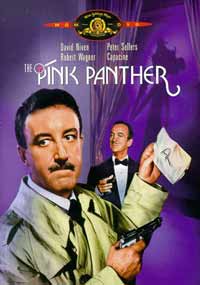 French Inspector Jacques Clouseau, so loveably played by the late British actor Peter Sellers, is in charge of a very delicate case. Herbert Lom memorably portrays Chief Inspector Dreyfus the frustrated former boss of Clouseau. Dreyfus is now coming up for reassessment in an asylum after having suffered a mental breakdown from an earlier Clouseau botch up. Dreyfus escapes the asylum, sets up a huge criminal cartel and kidnaps a scientist. Where he gets the money for all this we carefully ignore. Dreyfus has found the scientist has created a device capable of destroying cities or even countries if activated. Dreyfus then starts to blackmail the world’s leaders to get their best agents to kill Clouseau. This starts an endless line up of gags as country after country’s finest agent fail to kill the bungling Clouseau and kill each other in brilliantly timed mistakes.

Clouseau finds Dreyfus’ castle and, disguised as a dentist coming to treat a bad toothache, he takes more laughing gas than his patient, Dreyfus, and pulls out the wrong teeth.

Clouseau has to find and arrest the Phantom, a well-known jewel thief, played by suave actor David Niven, but it takes forever to stop trekking and get on with it. The route he takes is littered with hilarious site gags. Rome, Hollywood, Paris and finally Cortina d’Ampezzo are the locations these journeys take place in. Clouseau, without really investigating, is convinced that Sir Charles Litton, is the Phantom and that Litton plans to steal the most valuable jewel in the world, a precious stone that belongs to Princess Dala, played by Claudia Cardinale. The stone is known as the Pink Panther because if you take a good look at it, you can see what appears to be a Pink Panther about to spring.

The case could probably be solved and the criminal arrested if there weren’t other characters that make Clouseau’s task significantly more difficult. First, his wife played by Capucine, and Sir Charles Litton (a.k.a. the Phantom) are lovers and help and protect each other. Then, George, Charles’ nephew, played by a very young Robert Wagner, gets to Cortina and discovers the real identity of his uncle. Instead of turning him in, he partners up with him.

The day of the trial, neither Charles nor George is sentenced to prison but Clouseau himself. Both, his wife and Dala wanted to protect Charles and deceived poor Jacques, who finds himself with the jewel in his pocket when testifying.

Notable cameo roles include Omar Sharif and Lesley Anne Down.

Come along for the laughs in this old but goodie. My husband and I have bought DVD copies of this and a Panther relative, A Shot In the Dark. April is laughs months. Enjoy!

Flicks & Folios – Film Review: Journey to the Far Side of the Sun