MONTREAL (CUP) — Deception, anger and exasperation. Those were the words post-secondary education groups in Quebec used yesterday to describe their reaction to the provincial budget released Tuesday by Finance Minister Yves Séguin.

The budget does little to alleviate the $375-million shortfall in the university system “? a shortfall brought to light by the Ministry of Education and the Conference of Rectors and Principals of Quebec Universities last year.

Despite being the chief beneficiary of Séguin’s budget “? second only to the Healths system’s 5 per cent budgetary increase “? the education budget will increase only $309 million. It’s not yet clear how much of that will go to post-secondary education, but student groups are already saying it won’t be enough.

“Education is clearly not a priority of this provincial government. This budget will only serve to further entrench students in debt “? students who have made educating themselves a priority,” said Nicolas Brisson, president of the Fédération des Étudiantes Universitaires du Québec, the largest student group in the province. Brisson was referring specifically to the $63-million cut to Quebec’s financial aid program, cut from $355 million to $291 million.

Students will still be eligible for the same amount of student aid, however a greater percentage of it will be in the form of loans, not bursaries. “With these new cuts to financial aid, students from lower-income families will see their debt rise by about $1,000 a year.

This, in a province where the number of students graduating with $15,000 of debt or more a year has risen 300 per cent in the last ten years, resulting in significant accessibility challenges for families with several young graduates,” said Brisson. Université de Montréal rector Robert Lacroix said the heads of Quebec universities felt deceived by the promises of reinvestment that are not honoured in the budget, adding that the Liberal’s financial plan gives little reason for him to believe in the usefulness of the parliamentary committee on post-secondary education accessibility and funding currently underway in Quebec city. 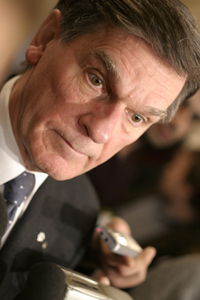 “As we are arriving at the end of the work of the Parliamentary commission meetings, which have highlighted the need for a massive reinvestment in the university system, one cannot help but question the significance of the exercise,” he said.

What may prove more significant in the long run is that in order to present the balanced budget and provide health care and education with the increased spending the two departments need, the provincial government will have to sell off some of its assets, although Séguin wouldn’t comment on which ones would be liquidated. It’s an announcement that disturbed members of the opposition; ADQ head Mario Dumont likened the move as “selling the furniture to buy groceries.”

The attention now shifts to Ottawa, where Séguin and other student groups such as the Université de Montreal’s student union claim the federal government is sitting on a $10-billion surplus that should be distributed to the provinces and not used to pay down the country’s debt load. Quebec spends $8 billion a year on interest payments for its debt load. 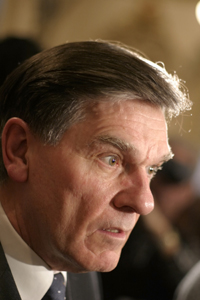 “Ottawa has a role in providing the transfer payments to make sure things work on the local level. With Paul Martin as prime minister now, things are looking bleak based on his past record.

The immense cuts he made to social services, including health and education, play a large part in the funding crisis we see today,” said Canadian Federation of Students spokesperson Tim McSorley.

“Ottawa’s role should be in ensuring that we receive transfer payments that will truly help provinces in meeting the needs of the people and not simply focus on paying down the debt.” The budget did maintain the tuition freeze, but didn’t regulate ancillary Fees “? a matter the Liberals promised to address during their election campaign. While Québec has the lowest tuition rates in the country, ancillary fees are around $685, second only to Ontario’s $694.