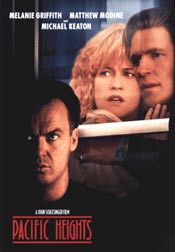 I first saw this film many years ago, around the time it was first released. The characters made my skin crawl. I really connected to the young couple, Patty and Drake (Melanie Griffith and Matthew Modine), trying to make a living by buying a gorgeous old Victorian house in San Francisco and renting the individual units out. The house was a stretch for them financially and they planned and worked hard. This aspect has to be understood by us or the rest of the film wouldn’t work. Fortunately, the script and performances are superb.

Melanie Griffith has always made me a little buggy. She has one of the softest voices of any actress in the business, a bit like Farrah Fawcett. I know that shouldn’t matter but she can’t seem to be gritty, yell or growl. That lowers some of the latitude she could have in my eyes. As a result I was a bit unsure about her character at first. For some reason the little-girl voice seems to belie the hardcore tough gal in this film. It just takes a while to meet that part of her character. Matthew isn’t — unfortunately, in my opinion — given much of a stretch for this role.

So along comes this guy, Carter Hayes (played with creepy intensity by Michael Keaton), wanting to rent a room. He has all the smooth answers. The problem is he never pays them a penny in rent and he knows every law that allows him to stay there and how the rules work. This gets frighteningly out of hand when cockroaches appear, noise goes on for hours and he won’t stop or even answer the door. The other tenants break their leases and leave and the battle comes down to the couple vs. Carter. He gets a buddy in the suite with him and the two of them trash it. He smashes a hole in the floor, rips out wall lights that Patty installed herself and leaves it a useless rundown shack. I won’t discuss his abuse. Worse than anything else, the law is on his side. The case will take eons to settle in court and by then Patty and Drake will be flat broke: then he’ll get the house. Michael is no longer Mr. Mom, or Batman. Now he is a sociopath and he is amazingly scary in this film. His performance is even and calculating. I give his work ten thumbs up.

The film is frightening in its intensity; the timing of every line, scene and plot point is eerily perfect and calculated to make the audience squirm. Squirm you will as the actors, music and pacing weave the web of discomfort and then outright fear.

Finally, Patty has had enough. She begins to investigate her tenant. Where banks, police and lawyers can’t go she can. She uncovers more than anyone ever imagined, especially the audience. And then the film starts to go into high gear. I refuse to tell you how this ends: you’d kill me! I will only say that of all the murder/mystery/whodunits I am writing about in May this one is the most spine tingling.

John Schlesinger (Midnight Cowboy) times the films so well it shows he is the right choice for director. If I need a guy who makes my flesh creep I know who to call.

I recommend you watch this when stress is low or when you want someone ELSE to be in trouble:.

Flicks & Folios – Book Review: The Cat Who Brought Down The House