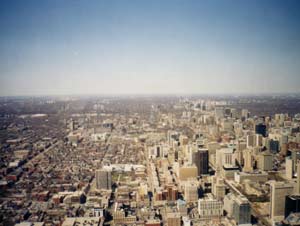 I begin my journey,
with a smile and a frown,
through the paved streets
of my hometown.

Where the doors are open
for a weekend each year,
during the spring season,
brightening up the town with plenty of joy and cheer. 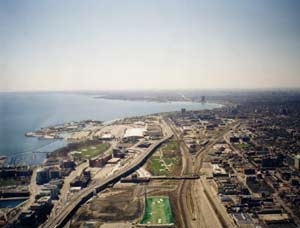 I.
Roaming into the ROM,
where his-story is told.
That “all men may know his work” carved by his palm,
begin the chapter of dinosaurs who died from the cold.

The chapter continues, as I walk through the arches of time,
to where the stuffed animals hang by wire,
next to a cave where bats climb
and chomp on fruit flies at night to their heart’s desire.

Desiring nature’s beauty, man wants to follow,
travelling to Europe with his carving tool.
Gothic wooden statues of Mary and Jesus weeping in sorrow
he carves, mimicking nature like a joker’s fool.

Man does not easily give up his tasks.
He turns to woman instead,
adorning woman with Dior’s sequined dress, feathered mask,
and a pillbox hat placed upon her dainty head.

II.
Church bells chime for the women on a bright Sunday morning.
St. Michael’s, St. James, Metropolitan United
proclaim the choirs by singing,
“Everyone is welcomed, you are all invited!”

Up the narrow staircase, where the ashes dwell
sits the Carillon practicing every weekend.
Ringing the city service by chiming the carillon bell,
in search of a signal from high above, hoping for a Godsend.

III.
Guided by the power of God, the Queen wanders into her park,
protected by the forefathers of the land.
Sir John A. Macdonald, William Lyon Mackenzie and George Brown guard the monarch.
Standing in stone, standing in sand.

Sand nurtures the red tulips in full bloom,
bleeding the battle scars of eighteen thirty-seven.
The troops marched up on Yonge Street to meet their doom,
wishing for a delayed trip to heaven.

IV.
Mackenzie marched his troops up Yonge Street,
past surveyor David Gibson’s house.
Where his eight children sat by the hearth, drying their wet feet,
while Mrs. Gibson spun her spinning wheel, quietly as a mouse.

V.
Spinning wheels morph into wagon wheels,
as the horses run towards the direction of the rising sun,
to where the horses hid in stables and waited for their daily meals,
preserving time at the historical society until century number twenty-one.

VI.
Decades have passed, and people still gather in the building of marble and lime,
where Big Ben chimed in the New Year
at Old City Hall, to plead the innocence of their crime,
faced by the murals of the early pioneer.

Upstairs in the courtroom where the judge follows lawful protocols,
the wooden courtroom doors sealed shut by the brass doorknobs,
as lawyers stare into the blank white canvas walls,
and innocent pleas are read, while witnesses sob.

Lennox did not cry, he did not give up his fight,
to make City Hall a spectacular sight to see.
He was the architect who stole the spotlight,
forging his name into the blueprints, smiling in joyful glee.

Even when he spent over two million dollars, Lennox did not look back.
He had the last laugh with the politician’s faces,
imprinting images of gargoyles for his counterattack,
carving his name into the exterior wall, invisible to the human eye in places. 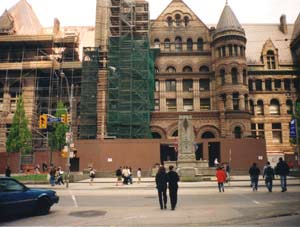 I.
A new eye watches over the city,
it is Nathan Phillip’s turn to show
how two tall buildings and a dome could make Toronto look pretty,
behind the eternal flame, lit by a fire’s glow.

Glowing inside the building is a wall of nails
made from copper and steel,
next to the hall from the photographs, where early settlers tell their tales,
across from the café where hungry library patrons enjoy a meal.

The Mayor eats upstairs in his glass office with a tank of aquarium fishes.
after lunch he sits in the busy council chamber hall,
answering questions from citizens, fulfilling neighborhood improvement wishes,
while citizens are waiting, as they gaze at the green tiled mosaic of Toronto on the wall.

The circular wall holds the funneled chamber base,
beside a small-scaled model of the city is put on display,
quilted by Toronto’s history, sewn by cotton and lace,
warming up the skaters on the square from a cold winter’s day.

II.
Today Eaton fills the bags of many shoppers,
whom the Canada geese guide.
Flying above the spouting fountain, leading to boutiques marked “his and hers”,
shoppers stock up on “Roots” sweaters, made from fleece.

III.
I walk past the busy gift shop customers, straight into the tower,
named for the Canadian National Railway,
where security guards puff air onto tourists, checking with their security power
and interactive screens show the tower’s construction from the builder’s workday

The action continues with the ride up to the tower’s top.
Flying up the elevator to the observation bases
as hearts pound and ears pop,
looking above the streets of Toronto to see people with tiny faces.

Staring at the tourist’s faces lying on the glass floors,
Lake Ontario, Centre Island, financial buildings fill the background,
and the cold spring air chills the deck of open corridors
next to the restaurant, revolving 360 degrees without making a sound. 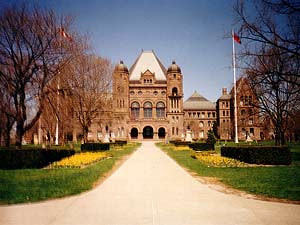 I.
My stomach growls, hungry with delight.
Hot dog stands I see at street corners.
Ketchup, mustard and relish I smother on my hot dog, to end my hunger plight,
while the hot dog vendor says hello to passing foreigners.

II.
Foreign tongues continue to speak,
as I walk down College Street
to Kensington market I go, to purchase groceries for the week.
A Portuguese shop I walk into, to find the finest cuts of meat.

Fine clothes, fruit and old furniture fill Kensington on my trip.
Bicycle riders travel around the market instead of riding the TTC rocket train,
as everyone else holds the rocket’s metal pole with a mighty grip,
knuckles become white in pain.

III.
With my painful calluses, I walk towards the eastern lands of China,
where loudspeakers blare out store sales
and ladies walk with fine silk gowns,
selling chopsticks, brush kits, Buddha statues and books of ancient tales.

Masked men walk to their homes,
fighting against the deadly SARS attack.
Protecting themselves from turning into bones
proclaiming, “Everyone careful, watch back!”

I hang my backpack
with a notebook in tow.
Someday I shall come back,
for there are more story seeds to plant and grow.