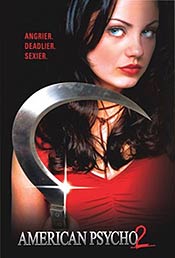 I wish I could tell you about the first film, but I don’t know a thing about it. I wasn’t so sure I wanted to see this one when the husband saw it listed on TV. It kind of looked like a horror film and I really had been horrored out lately. I decided to give it a few minutes. I darn near quit at the cat scene but it didn’t go where I thought it would so I watched it all.

Mila Kunis (best known as Jackie on TV’s That 70s Show) stars as a pretty young sociopath. I was really surprised that the boppy young actress who plays such a ditz on TV did such a good job. I believed her: she’s a convincing murderer in my book. The one question the movie leaves us with is, what is her name? We know her as Rachel, but near the end of the film we find out it’s not her real name.

Canadian great, William Shatner (do I need to remind you he’s Capt. Kirk from Star Trek) stars as Rachel’s university professor, Bobby Starkman. Above all else, his history with the FBI makes every student in his classes want to get the personal T.A. (teaching assistant) job that is up for grabs. Bobby thinks it’s just a silly waste of time and that it really doesn’t mean much. Unfortunately, that’s not what Rachel thinks.

Rachel decides to start getting rid of all the competition. She is an incredibly egocentric individual who is convinced she’ll get the position, but “just to be sure” she decides to kill off the other contenders. She sees this as merely a means to get ahead and become an employee at the FBI on schedule. “I’m killing the few to save the many,” she decides. She somehow doesn’t see what murder has to do with harming anyone, and has no concept of reality or other folk’s feelings. This is fine as far as plot goes but when we start slipping past how these murders are taking place in campus libraries and dorm rooms I started having some trouble. I was pleased when Rachel got caught, but then Rachel just dealt with it by killing the campus policeman. Sigh! She’s getting rather busy with all these bodies stacking up.

Does she manage to pull off this slew of murders? Of course not. While being pursued by the police she loses control of her car and flies off into a ditch. Her car burns, and she becomes the subject of her former psychiatrist’s successful book. As the movie closes, two years later, her shrink is at the FBI training school in Quantico lecturing about Rachel and her crimes. He closes with a lively book signing session. The twist ending is lovely. As usual I won’t spoil it for you.

I loved the opportunity to listen to Rachel rationalizing why murder and teasing her psychiatrist were important. Maybe that’s just my pscyh major talking?

There were some problems with this film:

1. I’m not sure if the music was supposed to be making me laugh. I was confused as to whether this was a humorous film. If so, the performances and script were too well done and should have been in the drama area.

2. There were a few scenes with grotesque images but by in large it was a Hitchcock style delivery: let your own twisted mind create the visuals. I wish they’d picked one or the other.

If you get a chance to see this film and like a good plot, take a gander and maybe you’ll drop me a note and tell me if you think it’s supposed to be a comedy or not.