HELP FOR YOUR PERSONAL COMPUTER 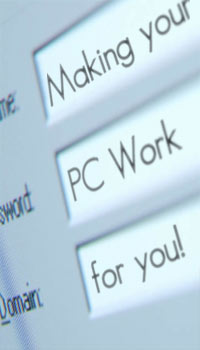 If acronyms didn’t exist the computer world would crash horribly. Just kidding. But just think of all the acronyms used in reference to computers. What do they all mean?

Computer-related acronyms are used in every day language just like someone’s name. Add to this all the other computer terms and WOW, overload!!! “Bob, can I use your memory stick to copy files to my computer? I’m using a CD-RW to burn my AGP files because of the useful AVIs AND MPGs I found on the web. It’s only 50MB.” Computer manufacturers would be so much better off using actual words to name a product instead of an acronym.

If you don’t know what these terms or acronyms mean, you are probably confused. To help you understand computerese the next time you’re on the receiving end of a high-tech sales pitch, I’ve compiled a list below that might help understand some of these. Some terms you may have heard of, others are not used so often but in upgrading or some terms could be important. Also my own pet peeve is people referring to their hard drive as memory!! ARGH!!

AGP – Accelerated Graphics Port – a slot for video cards. It was based on PCI (see below) but was designed for 3D graphics. AGP allows 3D textures to be stored in main memory rather than on the video card’s memory. The result is that graphics display faster.

ANSI – The American National Standards Institute is a voluntary organization comprised of over 1300 members founded in 1918. It creates standards for the computer industry. It also set standards for a wide range of technical areas from electrical specifications to communications protocols.

ASCII – The American Standard Code for Information Interchange is simply a code that represents English characters as numbers. A text file is stored as ASCII, . e.g. M=109, m=77, [=91, etc:

ADSL – Asymmetric Digital Subscriber Line is new phone technology designed to replace or add on to existing ISDN connections. (ISDN is explained further on). It is the most common form of high speed internet through a phone line. It is “asymmetric” because upload speeds are slower than download speeds.

ATA – Advanced Technology Attachment is an addition on to hard drives that integrates the controller on the hard drive itself. There are also 5 other versions of ATA (ATA-2, ATA-3, ULTRA-ATA, ATA/66, ATA/100).

AVI – Audio Video Interleave is a Microsoft standard for video. It would appear as an extension to a filename, e.g. “my_movie.avi”

BIOS – Basic Input/Output System is a collection of routines stored in ROM. It is the connection between the hardware (disc drives, memory, floppy drives etc) and the operating system. Users will rarely have to alter these files.

Bit – A Binary digIT is one piece of information that is either a 0 or a 1.

bmp – is the standard graphic format in windows. Its file sizes can be quit large because they are not compressed at all.

Byte – is a string of eight bits of information, e.g. 01110101. Sometimes bytes are longer depending on the computer system used.

CD-R – A Compact Disk-Recordable is a CD that can be written to just once.

CD-RW – A CD-ReWritable disk is a CD that can be written to, erased and rewritten up to an estimated 1000 times.

Controller – is a device that controls the transfer of data between the computer and its devices like hard drives, monitors, printers, and keyboards.

DMA – Direct Memory Access is a way to transfer information/data from the computer’s memory straight to the device it is communicating with bypassing the CPU. This makes transferring of data faster. A CD Rom can be set to do this.

DVD – Digital Versatile Disc or Digital Video Disc is similar to a CD-ROM but can store data in amounts of 4.7GB to 17GB, compared to 700MB (or 0.7GB) on a CD-R. DVD drives also read and write faster than most CD drives.

Firewire – is a new way of plugging devices into your computer. It is an extremely fast connection allowing up to 63 devices to be connected. It has data transfer rates of up to 800 Mbps (Mega bytes per second), and it transfers at a guaranteed rate.

gif – Graphics Interchange Format is a graphics format that is limited to 256 colours and includes data compression to make graphic files that are smaller than some other types.

ISA – Industry Standard Architecture bus is a type of slot in a computer that can be used to add components such as video, modem, and sound. It is also slower than a PCI slot.

jpg or jpeg – Joint Photographic Experts Group compression is used to create smaller graphics where some of the information is lost but can support up to 16.7 million colours. What is lost? Usually information that we cannot see, but sometimes the picture may lose clarity and sharpness.

KB – A kilobyte is 1024 bytes when describing data storage or file sizes and when used for data transfer speeds it mean 1000. Confused yet???

Memory Sticks – A type of memory that can be read, written to and erased. It is small and portable, about the size of a key chain and can be purchased in sizes from 16MB – over 1GB. Sticks are often used in small devices like digital cameras, video cameras, etc.

MP3 – is the file extension (the 2 or 3 letters at the end of a file name) for MPEG audio layer 3. Layer 3 is one of three coding schemes (layer 1, layer 2 and layer 3) for the compression of audio signals. Layer 3 compresses files by removing superfluous information that is not detectable to the human ear. Most music files shared on the internet are in mp3 format.

MPEG – Moving Picture Experts Group, anther format for storing a video file but at high compression for small file sizes. There are 3 types of mpeg: MPEG-1, MPEG-2 AND MPEG-4.

Parallel port – transfers data as single bytes but several at the same time. These ports, because of their speed, were quite often and still are used for printers. Over time they evolved into a 2-way connection and therefore receive information as well as send it. There are 4 types of parallel ports. Original Unidirectional, type 1 bi-directional, type 3 DMA and enhanced parallel port. The last 3 are bi-directional each being a step-up from the previous one. These have been mostly replaced by the faster and smaller USB port interface.

PCI – Peripheral Component Interconnect is a type of slot in a computer which can be used to add components to the computer such as video cards, modems, and sound cards. It is faster than an ISA slot.

PDA – Personal Digital Assistant. If you haven’t heard of them or seen one you’re living under a rock. Take all of your note pads, scraps of paper, little notes, addresses, daybooks and add in some games and you have a PDA in the palm of your hand. (One memorable brand is Palm Pilot).

PROM – Programmable Read-Only Memory is special ROM that can be written to. You can “flash” this memory and give it more instructions. Used to burn memory into your computer that will remain when the computer is turned off.

RAM – Random-Access Memory or main memory allows one to read or write information to it. It needs power to work and when the power is shut off it loses what ever was stored in it. The amount of RAM is a very important consideration when buying a computer as it determines what types of programs you can run, and often how fast your computer will run.

ROM – Read-Only Memory is used in almost all computers and contains a small amount of information that can ONLY be read.

SCSI – Small Computer System Interface (pronounced “skuzzy”) is a high-speed adaptor that allows 7 devices to be connected at once. The adaptor is usually card or chip at the devices “talk” with. Most PCs use an IDE interface to connect hard drives or other devices, while Macintosh computers mostly use SCSI. SCSI is somewhat faster, but more expensive.

Serial port – These were once the primary means of moving data between a computer and another device. They were also called COM ports and were most often used for your mouse. Today the serial ports are still used but USB and FIREWIRE ports are more commonly used because of speed.

USB – Universal Serial Bus is a new way of plugging devices into your computer. It can be used to connect up to 127 different devices such as a mouse, palm pilot, keyboards, memory sticks, digital cameras. Some experts believe it will eventually completely replace serial and parallel ports.

USB2 – Is a high-speed version of USB.

WINDOWS TIP OF THE WEEK

Are you using windows XP? If so, you may have noticed that when you have a program running more than once you see 2 tabs on your task bar. To make these items group into one taskbar item you can turn on the grouping option in your taskbar properties. To access this, right click on any blank spot on your taskbar (not on top of a program button, or you’ll get a different menu) and select “properties” from the pop-up menu. Select the “taskbar” tab, and click to check the box beside Group Similar Taskbar Buttons.

For advanced control of program grouping, you can install a small script which allows you to specify how many instances of a program must be running before they will group. The script, written by Doug Knox, can be found here: http://www.dougknox.com/xp/scripts_desc/xp_taskbargrouping.htm

COOL SITE OF THE WEEK

Webopedia. This is where I found most of my research information. Go to http://www.webopedia.com

If you have any questions or suggestions for topics you want discussed please email me c/o The Voice.

The Voice accepts no responsibility for loss of data or any other computer related problem you might encounter as a result of following computer advice in this or any other column. The tip of the week is intended to help you personalize your computer system. Novice users should ensure they understand the directions, and make backups of any files changed.

Making your PC Work for You – PC Self-Upgrade and Repairs, Part 2

Making Your PC Work For You – PC Self Upgrade and Repair, part 1