Articles
The Voice
Our Trip to Branson Missouri 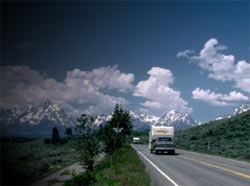 My husband and I decided to go on a road trip this year for our twentieth anniversary. We wanted to do something we would remember. We’d been to the Canadian east coast and didn’t want to go to the west coast, so where could we go?

I always wanted to go to Memphis, to see Graceland. I’m not a big Elvis fan, but thought I’d like to go there. Ed wasn’t too keen on it. Where else could we go? How about Branson Missouri? We’d seen many entertainers on Larry King Live and various other entertainment shows discussing their acts in Branson Missouri. I looked up the web site. “Go ahead fulfill a dream, laugh out loud, get your feet wet, reach for the stars, go for adventure in Branson Missouri.” Okay I’m ready for that. We decided that yes, we were going to Branson Missouri.

We bought tickets online for a couple of live shows, booked a campsite and were ready to go. When we told family and friends where we were going, we were met with surprised looks, “I didn’t know you were country and western fans.” “Well we’re not really; there are lots of other things to do in Branson – I think.”

Upon starting out I didn’t realize how far 930 miles really is. We decided to take two days to get there. Since we had our cat and dog with us would we need to stop frequently; we can’t leave them at home, they are part of the family and they really are good travelers.

Well by the time we got to Terre Haute Indiana, we were tired, hungry and just a wee bit miserable. After regrouping and having a good night’s sleep, we were off again for our second day. We saw lots of sights along the highway, for example three dead deer, one with a large dog standing over it looking like someone who won first prize in a pie eating contest. We also saw a truck with the cab in flames, as well as a few rollovers.

However, the most intimidating aspect of driving the Interstate Highways in the States and the 400 series in Canada, are the trucks. Fortunately, my husband is a good driver. He only nearly killed us once, when he decided not to let a truck enter the lane in front of us, but ultimately decided that wasn’t a good idea.

Driving into Branson is amazing. For miles and miles there are signs advertising who is performing, as well as all the activities, shopping etc. Several colorful billboards announced “Ann Margaret and Andy Williams performing together again.” I must admit I didn’t remember them performing together previously. Nonetheless we would not be able to see them as they were opening the day we were to leave. The weather was gorgeous, 85 degrees and sunny. The campground we stayed at was in the Ozark Mountains and the campsites were strategically layered into the mountainside. We were able to pick our campsite as we arrived on a Monday in late April: definitely not peak tourist season. In fact I would estimate there were approximately 15 campers in a campground that could easily accommodate hundreds.

Our first day was spent touring, shopping, going to the Wax Museum and a most nostalgic trip through the Toy Museum. The countryside was breathtaking. However on our second day there, as we returned to our campsite around dinnertime, we noticed the sky darkening. We had a good day and didn’t mind if it rained a little. As we watched the local news, a red flashing warning came across the screen, TORNADO WATCH FOR FAYETTEVILLE COUNTY AND THE ARKANSAS BORDER AREA. Is that us? We knew we were close to the Arkansas border, so we got out the map. Yes that was fairly close. We continued to watch the news as the tornado watch turned into a warning and included the county we were in. I was a little concerned, or should I say a lot concerned, as the rain poured, the winds blew and the thunder rolled for most of the night. Thoughts race through my mind: what if the winds picked us up and dropped us down the mountainside? I tried to push those thoughts out of my mind as I listened to Ed’s rhythmic breathing, seeming to not have a care in the world.

Fortunately none of my fears came true, as we awoke still in one piece in our wet, humid trailer. That day we talked to others at the campground; “Well this is tornado season.” I turned to Ed with a surprised look, his response was casual, “Well we are near Kansas, you know what happened to Dorothy and Toto.” I did not think that was funny. So, for the next six nights, after enjoying days filled with new adventures, I would lay in our camper in the Ozark Mountains, waiting to be blown away, wishing I could just click my heels and be home. Furthermore, one morning we awoke to hear that a tornado had touched down in Illinois and had flattened a bar which was full of people from a nearby campground. The victims felt they would be safer in the bar than at the campground. Fortunately no one was seriously hurt.

In spite of everything our days filled with shows, shopping, theme parks, outdoor theaters and perfect weather, compensated nicely for our nights, which were a wee bit scary for a person who is rather fearful of a regular thunderstorm. Nonetheless I would not hesitate to return to Branson Missouri — just not during tornado season!

Barbara is working towards her B.A. in English. She enjoys writing in her spare time. Barbara is located in London Ontario and can be reached at barbgodin@sympatico.ca.