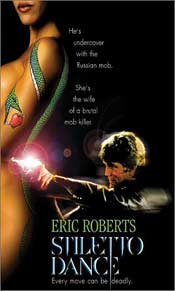 I admit that my choice of this film is biased. Eric Roberts is a solidly built hunk; take off Julia’s brother’s clothes and I will watch. In Stiletto Dance Eric does full frontal nudity on a bed (although everything is discretely tucked under) and some serious loving with the resident boob job!

May is mystery/thriller month, and this film is one of the most interesting I’ve seen.

The story begins with two cops, Kit Adrian (Roberts) and Jay Flowers (Romano Orzari), and their boss, played by Cameroonian Prince, now Canadian citizen, Yaphet Kotto (best known for Alien and the Bond movie, Live and Let Die). Kotto, playing a hard ass cop who has troubles getting the two guys to talk straight with him, has all too few scenes in this Canadian production. Romano hasn’t done much before. It’s hard to find photos and blurbs about him on the Internet, so who did he know to get this job!?

Kit and Jay end up hunting the Russian mafia through a world of drugs, vodka and murder. These Russians wear expensive suits and delight in cheap sex, or so the writer’s would have us believe. They trust no one. All goes according to plan until an undercover cop infiltrates their ranks with orders to bring them down. But this cop may be in too deep; he begins to kill for them. Is this because the mob reputedly has a pirated nuclear bomb, or is he turning?

Kit seduces the wife of their most brutal “enforcer”; risking his life and the entire mission. Mind you, she is pretty. The temptation to cross the line could put him in a cold grave. For this cop every move could be deadly unless he stays one step ahead. But does he?

This film offers more than a glimpse of the Russian mob’s kinky world, complete with a slew of gorgeous women in a sad excuse for a disco. They fall over any man with money (no matter HOW ugly he is!) and are obviously tripping out on something other than aspirin!

I’m not overly impressed with most mob movies. Stiletto Dance has its moments but also its downfalls. I didn’t believe the severed hand that was delivered to a bad guy’s restaurant in a fancy case: it looked fake. I admit I almost couldn’t tell the film was made in Canada. So many really good films come out of Quebec. They seem to skip the “we’re Canadian we need to be artsy” trend of so many others. But, the token American star is usually a tip off, as it was in this film. Plus, I bought a DVD copy and it says on the box “Quebec-Ontario production.”

Despite that, as usual, I love my twists, and this one has a beauty at the end. I didn’t see it coming. Ok, I was probably blinded by Eric’s muscle bound abs, but it is a very interesting ending.

If you are wondering how the title of the film came about it is explained when Kit and Jay get into a fight after their boss shows up. A stiletto is a type of knife. It isn’t the most creative fight scene but I have to say it was nice to see something other than just guns and fists.

This film is violent and the plot is very gangsterish, but the story is well done and there are plenty of twists and turns! I can say if you are seriously squeamish on body parts — don’t watch. Mind you, I was a little startled that it only got an 18A rating, not R! Nudity, body parts — my my, what we’re trusting to teens these days!

Much of the nudity involves Quebec Actress Lucie Laurier, who’s done a slew of work in Canada. One website even sells images from this film. I admit she’s had good work done, but the rest of us look so flat and “normal” next to these twelve-pound women!