Columns
The Voice
Flicks & Folios – Romance Book Review: A Pirate of her Own 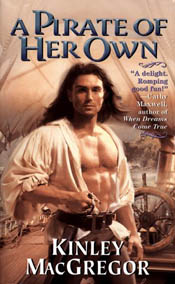 What possessed me to bid on this book from Ebay? That’s complex. There’s a hunky open-shirted guy on the cover, but he’s no Fabio. The subject of pirates has long been an interest to my husband and me. And then the write up of the book by the seller added to it. “He is the Sea Wolf, a dreaded pirate who stops English navy ships and frees impressed American sailors. Few know Morgan Drake’s name, and none guesses at his past. Except, that is, a nosy Savannah reporter named Serenity James. Determined to protect his secrets at any cost, Morgan sets sail for Savannah:and Serenity.”

I won and I’m really pleased I got it. This was one good read.

Just to let you know, this is not your average mushball romance book. In fact, it isn’t published by any of the usual romance book lines (Harlequin, Silhouette, etc). This is a Harper Historical Romance, and frankly later in the book it’s just plain racy! Author Kinley MacGregor is a Southern U.S. gal, and quite frankly I’m disappointed her email is no longer in operation. I wanted to congratulate her on this fine project. I’m not the only reader who felt that. Fellow author, Cathy Maxwell wrote, “A delight. Romping good fun!” Affaire de Coeur, said, “IMPOSSIBLE TO PUT DOWN:Heart-stopping adventure:poignant:hilarious:compelling. Kinley MacGregor has a gift for storytelling.”

If you’re aware of pirate history this book will probably get your attention. It is well written with plenty of details of life and expectations in the given time period, 1793. This is hardly the heyday of piracy but it will do.

Our heroine, Serenity Adams, is a wisp of a woman who is able to work in her father’s print shop, but just barely. Her father puts up with her desires to be an author but will not let her overstep her female boundaries. She is forced to stay quiet in the background most of the time. It’s a shame it doesn’t work! Of course every heroine in romance books has to be a real spirited girl.

Others have told her about a romantic pirate of the seas, The Sea Wolf, who supposedly sails on Triton’s Revenge. Man! I’m on board already. This information gets put into the paper under her “pen name”, S.S. James, and the Sea Wolf himself has read it. He is attempting to get out of people’s minds and this writer’s story is dangerously detailed. He of course doesn’t know the writer is a woman. That’s absurd!

Arriving in Savannah, Georgia he goes to the print shop and starts an argument with the writer herself, not knowing who she is! But it is Serenity’s birthday and she believes this is a mean-spirited joke. She runs circles around the Sea Wolf and he doesn’t quite know what hit him. So, he steps back out into the pouring rain and tries to figure it out. Kinley continues to do this for the remainder of the book, until we get to the racy part!

Are you up on your pirate time terms? Neither was I, but Kinley uses Serenity’s innocence to explain them beautifully. I was delighted to find out about a “powder monkey” without feeling like too much of a dunce. Powder monkeys were in charge of the powder for cannons. Usually young boys, they made sure, in battles, that the men had the powder to shoot the cannonballs.

Serenity causes all kinds of havoc and seems to endlessly get in everyone’s way as they decide to put her in dock. That means of course that she’ll either sleep with the men:uh no:or sleep in the captain’s quarters. Since there is only one bed, he is forced to sleep on the floor outside his own room!

After Morgan, the sea wolf, has his way with a willing Serenity, she disappears. Finally he shows up after more than a year as a drunken and miserable old sot. She has born a child”?his of course. It is a son. He is too stupid to figure out that it’s his — my only argument with the entire book. Finally after a bit of help from a woman in the house Serenity is taught how to loop a man around her finger. Like Serenity I was never taught how to do that, and was surprised to find out that maneuvers I thought were painfully obvious actually work!

The ending isn’t particularly genius. Romance formulas are unfortunately never going to change, but it was a fabulous read to get there!

Anyone interested in this 1999 book can check www.Ebay.ca. I’m going to sell it back again. If you want a great read, I recommend you step over to the Internet before you forget! Enjoy romantic June reading, even if you aren’t a June bride.