Articles
The Voice
From My Perspective – Choosing the right university degree

We often wonder what the end result will be for us once we graduate and become the proud owners of a university degree.

Students at AU might be interested to know that for those of us who are members of the older generation, our employment chances may be higher than for university graduates of the younger set.

In an Edmonton Journal article entitled, “Generation Underemployed,” Jill Thielman discusses the job market and recent graduates. Although Alberta has the lowest unemployment rate in Canada (4.5 percent in April), this rate is much higher for young people – males aged 15-24 have a rate of 10.3 percent, females 7.6 percent.

For adults over 25, however, the overall rate drops to about 4 percent.

What this means is that many young university graduates are unable to find work in the area of their education, and this situation sometimes persists for years after graduation. The primary causal factor has been identified as a lack of experience, and this is affecting graduates with degrees in virtually every discipline – MBA’s, Engineering, Arts, Commerce and Political Science students were all interviewed, and all of them expressed frustration at their inability to find satisfactory employment in their chosen field.

According to some reports, these university graduates are coming up empty because the jobs of their dreams are still being occupied by the “baby boomer generation.” One training consultant notes that significant retirement of the baby boomers won’t begin for another six years, and that even then, many will continue to hold onto their jobs.

For “baby boomers” the message is mixed. For those who are currently employed – this could mean that our university degree may be parlayed into improved employment prospects within our current field, giving us opportunities to advance. Others, like myself, who are embarking on a new career path mid-life, may find that we are starting at entry-level employment in competition with younger graduates. We may well be in the same boat when it comes to lacking a required level of career-related experience – but mature students also have a distinct advantage – that of life experience. We do have a perceived disadvantage of fewer productive work years ahead, yet even this is changing.

The labour market is increasingly “greying,” with older workers remaining on the job long past traditional retirement years, and this is a topic I will be addressing in a future article.

Post-secondary education, however, continues to be the single most important factor in determining whether one will find employment. A key component of employment success is choosing the right occupation and degree. A recent survey was undertaken by DBM, a global human resources consulting company, in order to identify employment areas that will experience growth during the next ten years.

One of the most important findings of the survey was that high school diplomas will no longer carry much weight, with the number of organizations requiring a post-graduate degree likely to double by 2013. Of careers that will see the most growth, the top four identified in the survey were technology/IT; sales/marketing; engineering/technical; and human resources.
Jobs that will decline include administration/clerical; general management and middle management. (Of interest to note, previous DBM findings calculated in October, 2003 had identified healthcare/pharmaceutical, finance, and professional services as the most popular hiring sectors over the six months following that survey.)

Some degrees will likely always be more likely to lead to a career that is a “labour of love” rather than wildly successful. Fine Arts degrees tend to fall into that category, and many graduates with degrees in art have resigned themselves to always having to work in another field to make a living, while pursuing their art part time. This is not the expectation a graduate with an engineering degree usually has, however, so the discouragement of these young graduates is understandable. It was noted that many graduates from two-year technical programs had greater success at finding work than those with four-year university degrees, and this is an important point to keep in mind when seeking career training.

Some other interesting items from the DBM survey:

“¢ job seekers who are willing to “reinvent” themselves and remain flexible were more likely to succeed in securing employment.
“¢ 53% of professional jobs are obtained through networking, while only 7% are found through print advertisements, and 4% through the Internet.

In the DBM summary of the “most desirable worker” of the future; “well-educated with a university degree” and “a desire for continuous learning throughout their career” topped the list. Since these are main goals of our studies at AU, we can be reassured that we are on the right path.

Debbie is a native Edmontonian, and a single parent with four daughters. She has worked as a professional musician for most of her life, and has enjoyed a rich variety of life experiences – with many more to come! Debbie is working towards an eventual doctorate in psychology, and recently served as the president of the Athabasca University Students’ Union. 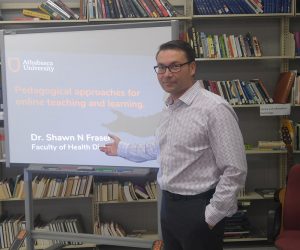