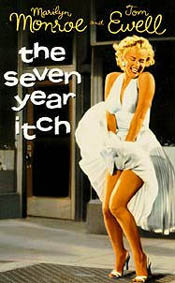 Few performers have been loved and admired as much as the late, great, Marilyn Monroe. Her real name was Norma Jean, but her stage name made a lasting impression along with her incredible face and body. Something about her slinky appearance made her desired but still seen as pure and good.

Film was good to Marilyn. The camera adored her and this film was among the most famous. A huge poster for the film was unfurled in New York City, showing Marilyn in the now-famous white dress, playfully trying to push it dress down as the wind from the New York subway blew it up. It is among the most famous images in history, but let’s focus on the plot.

Seven Year Itch opens on a hot summer day in New York City. Tom Ewell plays Richard Sherman, a married man living in a hot apartment. His wife and son are being sent off for the summer to escape the cloying city heat. Richard reads books in a publishing company for a living. As a result he has a rather over-active imagination.

At first Richard resolves not to behave like his building janitor, Mr. Kruhulik (played with lecherous zest by Robert Strauss), who happily announces he’s going to play all summer while his family is away. Richard is disgusted at first. He won’t be pretending to be single. No sir!

That is until Marilyn is the new single gal moving in upstairs. She is of course, incredibly innocent about life and how it works. She is repeatedly invited down for a drink, to cool off in front of Tom’s air conditioner and just to be sociable. In our days we would probably slam the door in the guy’s face, but Marilyn keeps coming down to see him even when she finds out he’s married.

That’s where the title premise comes in. It happens that Richard has been married for seven years and is now fantasizing madly about the gal upstairs. Considering the girl upstairs is Marilyn, I can’t entirely blame him.

Blame is something carefully avoided. It would turn this film into drama. Since we are so busy laughing by this fun romp it becomes a question of tact on the subject of taboo relationships.

Taboo was something Marilyn was known for forever playing in her films. She was the gal who just didn’t realize her hold on men and thus she got away with doing what was considered “wrong”. This film is no different. She innocently plays chopsticks on the piano with him and then he falls into a ridiculous scenario he has just played out in his mind about charming her into a delicious kiss. She freaks and they fall onto the floor. Even then she is supposedly still unable to figure out what happened!

Figuring out this film is easy. The romance comes in the form of comedy and is slathered on thick. The movie engages us into understanding that men will always be men whether they are married or not, and that women will always be wanted when they are beauties.

Beautiful Marilyn is fun, flirty and ready to enjoy life. She can’t resist telling Tom about putting her panties in the refrigerator to cool herself down. She also says she sits in front of the open fridge in the nude! Images, images!

How many movies can we find where romance and humor are so neatly balanced and an image is forever burned into our brain? There are few, and fewer still that are this well done. Keep a copy and fire up all 105 minutes in romantic June.

Director Billy Wilder made this a classic and made Marilyn more famous than ever!

From Where I Sit – “Outside” Behaviour

The Mindful Bard – For Your Consideration