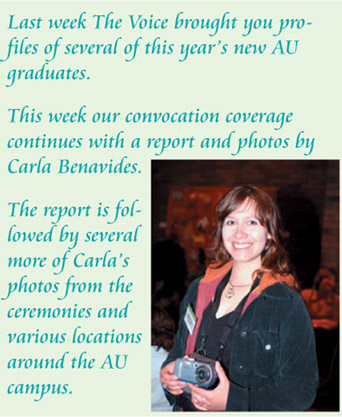 Welcome to part two of The Voice 2004 convocation coverage. Last week we featured short interviews with ten of AU’s newest grads. This week’s coverage includes a convocation photo album, and many other convocation themed articles throughout this issue. We hope you enjoy this extra-large, two-week edition of The Voice. Look for a new issue on July 5, 2004.

For a nicer layout and larger photos, please see the pdf version of this issue: http://www.ausu.org/voice/pdf/pdflist.php

When family and friends and even reporters hear the word convocation, it is often associated with a concealed rolling-of-the-eyes as it usually means long line ups, no parking, stuffy auditoriums and a somewhat long, boring experience where everyone, including the family and friends, file in and out; and that’s as good as it gets!!

However, coming to this year’s AU convocation has given me a totally fresh perspective on the word and I am sure I am not the only one.

This was not your normal run-of-the-mill graduation event, and to me it is reflective of how unique this university really is. With a convocation ceremony this well organized and down to earth, I could imagine how AU students might enjoy graduating more than once.

The morning started out calm and cool… this was nine o clock in Athabasca. Weather conditions were perfect, and promising considering how on a warm day, the tents naturally get much warmer.

Tents were set out amongst the trees to host a grand brunch, “A taste of Athabasca.” The food was excellent, to say the least, and was worth the trip on its own.

The menu was an assortment that would surely satisfy every taste bud.
My plate only had room for smoked salmon quiche, moroccan potatoes, cabbage rolls, ceasar salad, oriental salad, a vegetarian wrap, and fruit salad: yet there were plenty more treats to choose from!

To set a relaxed ambience, the soothing sounds of the harp and acoustic guitar were played by Terry McDade, as everyone lined up and eagerly gave full rein to their bellies. This was a good time to meet and greet one another as excitement was at its youngest.

It was before 11am with a little more than an hour to go. AU Students’ Union (AUSU) sponsored a brunch, exclusive to graduands, held inside the building. This meal featured a light and fresh assortment of meats, cheeses, fruits, other goodies, and an oversized bowl of delicious fruit punch!

Inside the graduate area, a large projector screen was hung along the far wall so that staff and others could watch live footage coming from inside the tent that would host the main event.

It was an elegantly casual affair as all enthusiastically partook.

Everyone seemed content as they ate, and mingled through the hours leading up to the day’s big moments.

All lounging areas, rooms, and hallways were buzzing, for this was a special opportunity for all students to find something in common; to exchange stories of the challenges and experiences while earning a degree. Plus, for many, it was thrilling to finally visit their University campus, and to possibly meet their tutors.

From 11 o clock on, the graduands filtered into the wardrobe rooms to dress in their gowns. Shortly, all were organized down one long hallway, in order of program, to receive instructions on how the ceremony would proceed.

By 11:45 it was the ten minute call, and the first graduands filled the door leading outside to the red carpet.

Leif Anderson initiated the procession, by sounding the bagpipes. Gilbert Perras, AU Registrar, followed carrying the symbolic mace, and then all of the graduands. After the graduands were members of the Governing Council, AU Academics, and the platform party, which includes AU executives and program representatives.

Once the grads, members of AU, and guests were on the stage in their seats, the audience was asked to remain standing for our National Anthem, which was sung by Elaine Magusin.

AU president Dr. Dominique Abrioux opened with the official greetings. A special presentation was made to install David J.Burnett as the new chair of the AU Governing council. This included a ceremonial dressing of David in the traditional robes, which was done by Gilbert Perras. Once in proper attire, Mr.Burnett gave an installation address in acceptance of the role. This was followed by the President’s remarks. And then the moment everyone was anticipating: the conferring of degrees, which involves a series of formal addresses.

These addresses began with the petition, presented by Dr.Judith Hughes, AU VP Academic, who asked the candidates to rise and address the Chairman and President on their behalf. The Chair then replied by declaring the petition granted and so the President presented the pledge, addressed to the graduands. Once the graduands responded “I do so promise”, the chair spoke to them as part of the admission. With that, the first group of undergrads lined up on stage left.

As each students’ name was called, they walked toward centre stage where they would kneel to receive their hoods. Dr. Judith Hughes, VP Academic, introduced each grad and read a brief bio, during which the grad would remain kneeling. The new graduate accepted his or her parchment from the President, then shook hands with the new Governing council chair and the representative for their program.

As the students walked off to stage right, they received a classy engraved metal clock as a gift from the student’s union, presented by AUSU office staff, Executive Director Mark Jones and veteran Administrative Assistant Christine Lynch.

No other University, that I know of, takes such time and care, not only to present each student, but to also offer the audience an inside glance at the students’ perspective. Each student was treated equally, with respect and kindness.

Awards began with the prestigious “”Governor General’s Silver Medal,” which was presented to Jeri Lou Grieco, a Bachelor of Nursing Graduate of Calgary, Alberta. Jeri gave a superbly articulate address to the graduates and members of the audience.

An Honorary degree of Doctor of Athabasca University was presented by Dr.Terry Anderson and awarded to Dr.Tony Bates, “in recognition of his outstanding scholarly contribution to open and distance education.”. This was followed by Dr.Tony Bates’ address, which is provided on the University’s website.

In closing, Chair David Burnett asked the audience to rise and remain in their places until “the platform party, Governing Council members, academics, and the graduates have recessed.” As the platform party, Academics, and Governing council exited the tent, they all parted like the red sea, lining the edges of the red carpet to honor the new graduates’ passage into their new world. This was a defining moment of acknowledgement and acceptance into the academic community.

Having the procession proceed back down the path of the red carpet from which they began, felt representative of the students’ coming full circle, symbolically, in time, life, and education. It was now complete.

Excitement was renewed as the graduates faced a paparazzi of happy family and friends.

As if she knew, mother nature’s perfect timing brought the heavy rains of change. This downpour lasted only a short while and then the sun showed through the clouds to brighten the rest of the afternoon.

I was easily swept up in the energy, the love and openness that was being shared by all. It was then that I caught up with several of the graduates to get their final thoughts on all that had culminated to that day (see last week’s issue). Hearing the experiences through their words, brought a sense of reality to this very unique occasion.

Photo of Carla by Paul Nedza 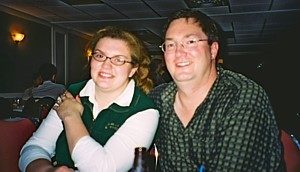