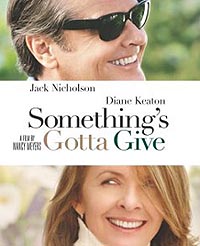 I’ve never been much of a Jack Nicholson or a Diane Keaton fan, but this beauty of a film won me over.

The story goes like this: Marin (Amanda Peet), is a twenty- something with a new boyfriend, playboy Harry Sanborn (played by Jack Nicholson). The problem is, Harry is 63 years old. He’s never been married and has the worst commitment problems ever! Along they go to the beach house her mom, famed writer Erica Barry (Diane Keaton), owns. This is the weekend that Harry is going to get lucky with his new young interest. But, as Marin changes to go swimming Harry heads to the fridge for a little something and in walks Erica and her feminist teacher buddy Zoe (Frances McDormand, who was so wonderful in Fargo).

Then the fun begins as Erica has a conniption fit and calls the police to report an intruder. The call finally gets canceled but not until her daughter confirms that Harry is her new boyfriend. Zoe decides to end the bickering that ensues when she suggests that as adults they all stay for the weekend.

Everything is fine until Harry has a heart attack. It isn’t too bad of an attack, but tell that to the guy with the feeling of an elephant standing on his chest. This begins the medical treatments from the cutesy doctor (gorgeous Canadian, Keanu Reeves). Off and on Erica and the doctor get together for dinner and a little nookie. Erica is having a hell of a time with the age difference but the doctor is fine with it.

Now Harry has to have someone take care of him and his personal staff comes in to poor Erica’s house. She has to put up with this intrusion on her home and his dopey staff’s inability to figure out where to put an empty water glass. She hates Harry and all he stands for until Harry becomes a real silly flirt after he sees her naked by mistake. What ensues is a hilarious and very revealing Diane Keaton! (Incidentally Diane is in amazing shape and hasn’t a baggy piece of skin on her. No doubt it’s from all that sun avoidance.) Soon Harry and Erica are saying things and doing things they’ve never said to anyone before. It gets frightening between them and then Harry says, “I love ya.” Erica cracks that she’s not really sure it counts if it’s “ya” instead of “you”.

Soon Harry starts to crap out on this new set of feelings. He’s so much more comfortable doing what he’s always done. So he is a jerk and ignores Erica and she quickly finds him out with some ditzy young blond. Erica is soon wailing in tears and telling him a sappy earful. It’s a shame that this only makes Harry fall back into the hospital with chest pains. He isn’t happy about all this. So, Erica gets back to her wandering lost writing project and essentially writes every line Harry’s ever said to her and everything that happened to them. Later when the hit play opens, Harry learns that “Henry” dies in the play, and winds up in hospital again from the shock of being made a public mockery! He then disappears for six months and gets his poop together the hard way. He listens to his ex girlfriends tell him all about the hard stuff about him. Meanwhile, Erica gives herself a gift of going to Paris (where her hit play takes place) for her birthday. Guess who strolls in? Harry has now decided that he can take this “older” woman in his life. But then in walks the good doctor Keanu who happens to have a ring box he’s finally bought for her.

Harry is polite as hell to everyone and then bawls his eyes out on a snowy bridge in Paris. Perhaps he’s finally aware what an idiot he’s been.

As usual my mouth is closed as to how it ends.

Nancy Meyers (who wrote, directed and produced this) is the woman behind the characters. She is most known for her witty and intelligent comedies. This is another one. Three cheers to her brilliant project!

Ten thumbs up! Rent this Sony film or lose out.

From Where I Sit – Hurray for Harry