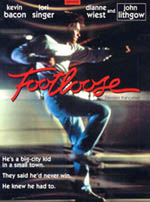 Have a new family move to a small town and make sure the town is in turmoil. That’s the basic premise for this film. Then have a real cute kid, Ren McCormack, AKA Kevin Bacon come along and challenge all their small town excess baggage.

The stink began when the preacher’s son died after a teen party involving rock music, resulting in a town-wide ban on live music and teen parties. Dianne Wiest is amazing as the preacher’s tolerant and supportive wife, Vi, who loves her daughter and mourns the loss of her son but wants to tell her husband that maybe it’s time to let the past rest. It’s a tough job with a bull-headed man like the zealous Reverend Shaw Moore (John Lithgow).

Remember Marc Singer? He was the resident hunk in “V” the TV series as well as many movies. His little sister, Lori is the preacher’s daughter Ariel, a key person in this 1980s movie hit. She’s a bit “loose” and falls for Ren but he wants to make sure he’s not going to be a notch on her belt!

This movie makes you want to jump Kevin Bacon who is just about the sexiest thing on two dancing legs. His moves are a combination of acrobatics and dance. He is especially powerful in the barn scene. Ren hates the little town he’s has to live in with his mother, who has recently been widowed and forced to live with her brother and his family in a little town where narrow Christian religion is king and everyone is fearful of the preacher. Then along comes Ren who just wants to have a school dance.

The kids at school try sneaking over the county line for a night out but that isn’t going to work for long. The drinks are liberal, there’s a fight and then they have to find a way to get home without getting caught. Thank god for friends.

Ren’s new friend in town is Willard Hewitt (Christopher Penn). You might want Kevin but I’ll take slim and oh so toned Penn, who simply reeks of masculinity and strength. He does an amazing dance number with a solid gymnastic style after trying to convince us that he can’t dance. BOY can he ever pick it up fast!

Eventually everyone wants to dance and the town council is petitioned by Ren and the school kids who want to have a party legally. They cite verses from the bible and manage to eventually get their way, but I’m not going to tell you how it ends and how that happens.

This is such a great movie for dance and get up and go. If you’ve been sitting on the couch too much with your studies why not slip it in the VCR and get up for some exercise. Just watch the walls with all those back flips you’ll do!

This great musical keeps you boppin’ with some of the best 80s music on the market, and has gained a huge following and many fans who both adore the music and want to fall under the spell of the dance and acrobatics.