Articles
The Voice
The Politics of Persuasion 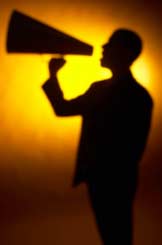 A good feeling, isn’t it, to bring another around to one’s point of view, converting opinions the way we might exchange currency, say yen for Eurodollars? Let’s face it, most of us feel pretty strongly that we have a better grip on reality than our neighbours. Oh, certainly some of us do present an aspect of tolerance, even respect for opinions different from our own. With the furrowed brow of a genteel country doctor, we gravely nod our head, listening with feigned indulgence to wrong-headed notions, ill-informed beliefs of many stripes. In reality, though, much as we may profess an inclination toward open-mindedness, most human beings are not really in the market for new ways of looking at the world. We do not want to hear that everything we know is wrong.

Strongly held convictions, the willingness to act on them, and the wherewithal to foist them on others are the marks of leadership and greatness. We strive for this quality in ourselves, and are magnetically attracted to it in others. Doubt is for the weak, hesitation for the frail. It has always been thus. A millennia or so ago, a group of high-minded spiritual leaders, absolute in their conviction, persuaded great numbers of European nobles and commoners that nothing would be more delightful to God than the sight of them marching through the Near and Middle East, looting, pillaging, raping and performing sundry acts of desecration as they went. The masses, eager for salvation and adventure, bought into it, and the Crusades began.

Far more recently, a group of high-minded spiritual leaders from the Near and Middle East persuaded a group, smaller in number but no less determined than the Europeans, that the best way to cure the sickness of Western imperialism would be to fly a couple of planes into buildings. We called that “unprecedented.” Persuasion and progress. Progress and persuasion.

Throughout history, the tools of persuasion have been ingenious and diverse. Sometimes, as with the shiny psychological scalpels wielded by spin doctors and advertising hacks and media consultants, the instruments have been subtle, almost invisible. Think of the billions of dollars spent by consumers every day on shiny, toxic crap – everything from cars to liposuction to cosmetics – promoted by advertising agencies that prey on our selfishness, greed, lust and insecurity. In other cases – inquisitions, gas chambers, mushroom clouds – the tools have been more crude.

Today, the poison of persuasion is more potent and more concentrated than ever. Newspapers, magazines, television and the internet form a bubbling cauldron of opinion and coercion, and for the most part the ingredients are provided by a tiny, supremely influential elite possessed of high-minded and firmly held convictions. From Tokyo to Nunavut, the poison is paralyzing our awareness. The values of Time-Warner and The Wall Street Journal are becoming the values of most of humanity. The pages turn, the shareholders peruse the columns. If the shareholders get nervous, the generals wait for word, governments topple, the people are persuaded it’s all in the name of security and progress.

What’s needed, it seems to me, is a little less certainty and a little more doubt; a lot less persuasion and a lot more soul-searching. We need to talk less and listen more. We need to suspect that others may be right and we may be wrong. We need to put ourselves in the shoes of the powerless and the disenfranchised. We need to become more aware that what is good or convenient or desirable for us may be hurtful or destructive for others. We need to see that we are connected to everyone and everything about us, part of one great whole. Above all, we need to question those who wield their influence and power to convince us that they have the solution.