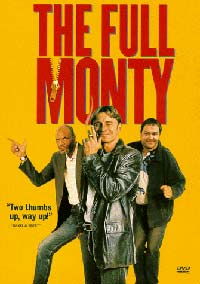 A group of unemployed Yorkshire steelworkers, all on the dole, have had enough of being poor and unable to hold their heads up proudly. They decide to try to fill their empty wallets and boost their flagging morale by doing what the Chippendale strippers do – taking it off. There is just one problem, these guys are hardly buff and can’t dance on beat!

So, they run, hide and rehearse in quiet. These men are unemployed, and feel suffocated by their sexual lives. Plus they just want a little respect. Unfortunately the locals had strippers through not too long ago and so the leader of the group, Gaz, promises they’ll one-up the Chippendales by removing everything, which is how we get the title The Full Monty.

The script and performances will have you screeching with laughter, but the boy’s sense of camaraderie and caring brings the film home.

The cast of this popular British film includes Robert Carlisle, and Mark Addy, who have both gotten farther with their careers than the other cast members. Mark is now on an American sit-com and Robert is doing amazing character work in film.

Carlisle is Gaz, a divorced father behind on payments to his ex. She is remarried and holds the keys to his son. He rarely gets to see the boy and it’s tearing him up inside. His son is having a hard time accepting dad’s unusual behavior, which includes robbing steel beams to sell for cash and trying to take off his clothes. Dad is looking more and more like a loser.

Addy is Dave, a sweet man who is overweight and torn between supporting his wife and making a truckload of money on the strip show with his mates. He disappears for rehearsals without telling his wife and she now thinks he is having an affair. Dave can’t take the pressure of having to get in shape, or take off his clothes in public as a larger man.

Rounding out the cast is Tom Wilkinson as Gerald (the teacher of the strip group), whose wife thinks he still has a full-time job. To add to his stress, he’s panic-stricken about getting aroused at the drop of a hat. Virtually anything seems to turn him on!

Horse (Paul Barber) is a charming low-key African-British man who is always worried about the size of his manhood and has done all he can to increase it. Steve Hulson is a shy redhead who plays in a traditional musical orchestra and is very quiet for most of the film. Guy (Hugo Spear) is hired on the spot based on his , err… talent. Just to be clear, it’s not his dance talent!

The ladies in the film are a mix between saucy toughs who can’t stop picking on the men, and the loving women who just want to be with their sweet guys. My favorite moment is when Dave finally confesses why he’s been stealing away from his wife, as she’s packed and ready to leave him. He finally asks, “Who would want to watch me take off my clothes?” I always want to answer his character with a straightforward “me!”, but his wife always gets there first. The moment is tender and loving, and Dave decides to do the show with his wife is in the audience to cheer him on while Gaz, the most dedicated member of the group, takes on a poor-me bout until his son gives him a verbal kick in the rear. Late, he joins in and the group finally blows down the house.

We will all cheer in the end (no pun intended) of this tastefully and hilarious film.

We’ll cheer also for the great 1970’s dance music that is featured throughout, including tracks from Donna Summer, Sister Sledge, Gary Glitter and Tom Jones.

There is a killer funny moment in the film when the men line-up at the unemployment office and the speakers begin to play one of the musical choices they have for their upcoming show. A shy beat begins to take over and the dull line-up becomes a tame rehearsal spot as their moves start to take over.

First-time director Peter Cattaneo does a crackerjack job. He brings the well-written script to life and conveys the life and warmth these people have in their small town.

By the way, the film is free from the nudity that is implied but the topics are very adult. It’s your choice on whether you think the kids are old enough to see it.

This film runs a cropped 95 minutes. Take the time for a great toe-tapper.