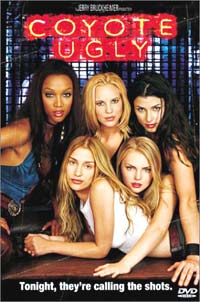 Jerry Bruckheimer has turned out a lot of hit films including Gone in 60 Seconds and Armageddon. He added this little musical beauty to the list in 2000.

To get this film you start with getting the hottest model on the planet, Tyra Banks, teach her to do a hot dance on a bar and throw in a cast full of women who can hootenanny with the big guns.

The story goes that a young gal (Piper Perabo as Violet Sanford) moves to New York to pursue her dream of being a famous songwriter. She sings well on top of buildings, but in real life she runs the minute life gives her a shot! In the meantime she needs a chance to pay rent and eat. Along comes a strange bar where women rule! A woman runs the bar and she hires hot women who down drinks with the clients. Wild antics happen on a regular basis. The locals aren’t exactly what I’d call quiet folks looking to drown their sorrows in a neighborhood bar; they yuck it up and are as loud and wild as they can be.

At first, Violet isn’t sure she can handle this raunchy life. She is a bit unsure. She drops drinks, doesn’t know the lingo and fails miserably. By the time she catches on, she has to deal with a few other problems.

Bruckheimer is smart enough to realize that the innocence of Violet’s character is where the focus of the film should be. He lets us see her tender and nervous self. She is magnetic of course.

The first rule of the bar is to appear available but never be available. The women get the cash they need, attention they adore and the wild life they enjoy. They string along the mostly male bar flies and this seems fine at first. The problem is that Violet has fallen for one of the guys and she is trying to follow the rules. She gets into some serious trouble with the boss when there is a fight at the bar. She is told off in no uncertain terms.

Coyote Ugly is well done but it isn’t a “deep” or important look into the bar fly world. That in itself is kind of a shame. I would like to see more character development when we get films that tackle an interesting subject. I didn’t know about the real bar or the lifestyle these women must suffer. No steady beau!!

I recommend this film to those who understand you are NOT going to see nudity in the bar, women dishing out sex to every living male, just plain good old fun that the men love to see.