Articles
The Voice
Notes From A Boomer’s Diary – Part One: Power Yoga 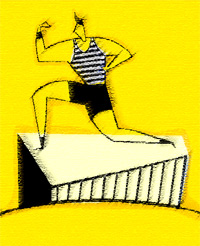 It was when my fingers were wrapped around the throat of the doofus with the Phish t-shirt, anti-WTO bumper sticker and scraggly goatee that I first began to understand the true nature of the dharma. It’s odd, the layers of significance that are contained in an action. There I was, my hands choking the life from the insufferable oaf, feeling that sense of rapturous selflessness, that state of being utterly and completely in the moment that my spiritual consultant so often speaks of. I had never before experienced such utter joy, such intense – I don’t know how else to put it – completion.

At the same time, though, my joy was dampened a bit by the awareness that all of my spiritual learning up to that point had led me to believe that there is something not quite evolved about choking the life from another human being, no matter how inferior and unenlightened he may be. No matter that he cut me off in traffic and took the last parking spot. No matter that his selfishness and poor driving caused me to spill my wheat grass frappe and be late for my power yoga class. Oddly, most of the spiritual guidebooks I’ve purchased from Chapters seem to imply that random acts of violence are a bad thing. It is during those times when our self-actualization is most tested, they nag, that we should be most centred in the way.

I realized, in that transcendent moment before the police sirens broke my meditative trance, what a load of crap that is. Like an epiphany, it became so very clear to me that what we really need, in this post-9-11, global-economy world, is a new spirituality – one that speaks to the way we really live our lives. What we need is a philosophy that takes the best aspects of Eastern spirituality — the sexy yoga pants, five star Buddhist retreats, and Tibetan art coffee-table books — and at the same time celebrates the little events — like the three martini lunch, real estate speculation, and sabotaging the career of a co-worker — that fill our days and help keep us grounded. What we need is a spirituality expansive enough to incorporate zazen and road rage, meditation and eBay, koans and logos.

By standing up to that Gen-X weasel with the shitbox Tercel, I was sending an important message to terrorists and layabouts everywhere: Do not fuck with our lifestyle, and do not make us late. Bullying and exploitation, when undertaken with correct awareness, are the mindful acts of an enlightened mind. The world is our fish-farmed oyster, and if it means laying a good old-fashioned shit-kicking on some pathetic neo-hippie slob, or invading a country or two, to preserve our right to pursue our spiritual / materialistic quest, then bring it on. 24/7, we’re enjoying the best of both worlds – East Meets West, dude, East Meets West.

What Could Happen if Academia Accepted the Spiritual

The Philosophy of Soulmates

Nature Notes – From the Backyard to the Biosphere. Nature in Our Midst: Finding the Local Green