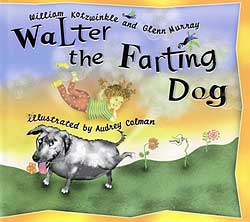 The story of Walter the Farting Dog gave me a sense of deja vu because I once had a dog like Walter. My dog Berkeley had a conspicuous case of flatulence, and the veterinarian actually suggested that I try giving him over-the-counter anti-flatulence medicines. I always wondered what went through the cashier’s mind as she scanned my weekly purchase of gas-relief tablets. Just like Walter, my Berkeley had a special diet, and just as in Walter’s case, it failed to alleviate the gaseous emissions. Just like Walter’s adoptive family, I too found my dog’s outbursts embarrassing. Believe it or not, though, Berkeley was still a loyal and loveable member of the family, just like Walter. And it is Walter’s relationship with his adoptive family that gives this book its special appeal.

The story, written for younger elementary school children, begins with Betty and Billy bringing home the smelly dog. While bathing Walter, the source of the smell becomes obvious. Even though their new dog farts “a lot”, Betty and Billy do not mind. Father does not share the children’s unqualified love for the dog, and as a result Walter undergoes numerous diet changes, even becoming vegetarian, but it is all to no avail. Eventually, Father threatens to send Walter back to the pound, forcing Walter to try and contain his gastric emissions. He resolves that he will never fart again, but the reader knows that this is impossible for Walter. I do not want to reveal the explosive ending, but the family pet is only spared from his dilemma when his socially unacceptable attribute makes him into a full-blown hero.

The subject matter of this book (flatulence) may make some parents a little uncomfortable, but it also makes the book attractive to young readers. Indeed, Robert Munsch in his story Good Families Don’t, has already proven that this somewhat impolite theme is fascinating for many children. Taking up this subject, William Kotzwinkle and Glenn Murray may just help some children become interested in reading.

We can all be grateful, however, that “scratch-and-sniff” books have fallen out of vogue. Instead, Audrey Colman’s colourful and vivid illustrations in Walter the Farting Dog, seen through the sfumato of Walter’s emissions, help to portray the olfactory aspects of Walter’s problem. Though highly amusing, the pictures of a somewhat embarrassed-looking Walter also manage to heighten our sympathy for his plight.