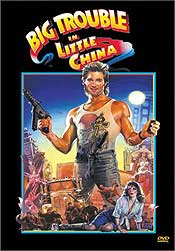 Trivia buffs might want to know that the first few drafts of this script were called “Buckaroo Banzai vs. The World Crime League,” which was the proposed sequel to The Adventures of Buckaroo Banzai Across the 8th Dimension (1984) (http://www.imdb.com/title/tt0086856/). For an unknown reason, it was later scrapped.

Director John Carpenter has made a huge load of films, mostly on a dime budget. I can’t imagine this guy actually getting an Oscar for anything but this script has been well received. Strangely.

Kurt Russell and Canadian Kim Cattrall star. Jack (Russell) is a trucker who gets dragged into a mystical Chinese battle in Chinatown when he agrees to take his friend Wang Chi to pick up his fiancée at the airport, never expecting to become involved in a supernatural battle between good and evil. Wang’s fiancée has odd emerald green eyes, which suddenly make her a target for an immortal sorcerer, Lo Pan, and his three hoods. These guys are superhuman and impossible to beat!

It turns out Lo Pan must marry someone with green eyes so he can become physical again. Jack must save Wang’s fiancée from Lo Pan and his henchmen, and win back his stolen truck. But how do you defeat a bodiless enemy?

There is nothing prize-winning or amazing about this project -which is unfortunate. The idea is good but the effects and plot are mediocre. The idea should have worked.

Perhaps it is because the idea is so heavily tampered with. The script was rewritten a zillion times. This kind of thing only seems to muck up an idea in many cases. You need to have a really kicka$$ writer to rewrite an existing idea. The performances get muddied as the plot does, despite Russell’s best efforts.

Veteran oriental actor James Hong comes plays our resident bad guy, Lo Pan. Actually for those of you out there who know some basic Chinese, the Lo Pan is the compass used in Feng Shui either for figuring the position of the dead or for figuring the placement of objects such as homes and objects within the home.

Regrettably this could have been a great project to laugh along with but is on my examples list of projects that are funny as in bad and funny as in what doesn’t work.