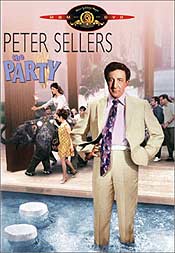 Up on a mountain hundreds of people from India are fighting evil invaders. They are swathed in traditional garb and shooting rifles — shooting at their enemy. Along comes a foolish member of their troop who blows his bugle and keeps blowing. Won’t this fool shut up? No, because the foolish man is Peter Sellers as Hrundi V. Bakshi, an actor brought over from India to play this role and taking it to the extreme. Finally the actors are shooting at him, but he won’t die. Over and over he is shot, but he still continues to blow the damn bugle.

Eventually the director ends the scene. After the messed up battle scene, they have to shoot a big explosion of the fort. The scene has to be shot right because they really are blowing up a fort, which means it has to go up big time and in one take. At this point, Hrundi comes along and discovers that his laced sandal is undone. He drags it along and then finds a handy spot to put his foot up and tie the laces. It, of course, is the plunger for the explosives. Sliding the ignition down with camera’s not running, rocks and ancient stones fly! Since this is well before the day and age of computer graphics and special effects (1968) the studio has to deal with the oversized mistake.

Fred Clutterbuck, the studio head, is phoned by the director with the name of the fool who has created this fiasco on the set. His name is written on the first paper Clutterbuck sees on his desk. The problem is that his secretary comes in and wants the list for the guest invitations for the party he is planning. Hrundi then gets a letter of formal request for his attendance at the studio head’s house party. No one has a clue who he is, even the flustered director who can’t remember where he’s seen the guy. The party is a snooty affair with anyone who is anyone in attendance. Hrundi is out of his league and must try to make his way through the mess.

The trouble begins when Hrundi steps in something hideous with his white loafers. He hobbles over to the elaborate running fountain in the house and tries to wash off the goop. Except that when he does successfully get there his shoe escapes in the water and floats off through the house. After a long and elaborate set of attempts to regain his shoe he goes on to other adventures, which include meeting big stars and a pretty lady. He plays with the “cutting edge” wall equipment that runs the house. He all but fries the houseguests when he flips the wrong switch and turns on the large open fireplace and everyone questions his sanity as he discovers the oscilloscope and plays with it as the entire household listens to his ridiculous calls, coughs and sounds.

Claudine Longet, who became an unwilling celebrity when her boyfriend, professional skier Spider Sabich, was murdered in 1976, plays the pretty lady that Peter is attracted to. She becomes an unwilling helper in Hrundi’s nonsense.

The party gets way out of hand when Hrundi tries to wash off an elephant that the host’s children have brought home bearing symbols and slogans. Never mix washing soap, fountains and sprinklers! The elephant must be pretty tame because it was crawled over by every living person in this film and stayed put while the soaps suds drowned everyone!

I’m dedicated to this film. I have a copy and every so often I just have to put it on and die laughing over the gags. Rent it. Laugh and let go of your stresses.