Columns
The Voice
Flicks & Folios – Comedy Film Review: The Fast and The Furious 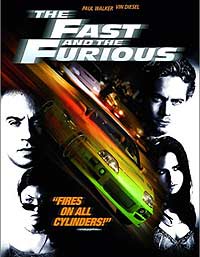 This month begins Vin Diesel month with a review of Fast And Furious, the film that really put Vin on the market just three years ago. Since then he’s rocketed up the fame ladder and become a real ladies’ favorite!

I wish I could say that I crawl the walls for this film because of Vin alone, but I also watch it for Michelle Rodriguez and the stunning effects the cars are capable of executing. I admit that Vin’s muscles are a really nice extra though!

Vin’s physique (as Dominic) is on view in a hot shot with Rodriguez, but it does not leave me begging the person next to me to ride me as their slave girl! Sorry Rob, (the director) you seem to be poor at scoring sexy shots that get my juices boiling. Sexy stuff does include the cars and the all the roaring engines. Vin exudes both angst and toughness, so well that I want to do is call him the new Brando.

This is really a very Brando-esque film. It rivets with toughness, but also shows that tortured tenderness that Brando embodied. In one scene, (dubbed the Quarter mile at a time) Vin takes on the mantle of tortured soul with great success, showing why Dominic is so devastated and tough. He explains why he is so willing to live for racing and racing alone. There is only one problem. When I roll the DVD back to the scene where he races Vin doesn’t seem to be “free” or “at peace” or “thrilled.” I’d have called Vin and Rob on that one – sorry gorgeous!

“Gorgeous” also includes some of the other people in the film — like Jordana Brewster as Dominic’s sister, Mia, and undercover cop Brian, played by Paul Walker, who pursues her. A more cliché specimen of the perfect American man I don’t think you could find! He is blond with blue eyes and truly adorable features. It works with her physically perfect brown-eyed brunette features. Frankly, I’d rather look at Vin’s wide nose and it’s odd little dips and gaze into his drowningly dark brown eyes! I like “different” — maybe because I am! There are also the people who show up at the street races. They are all sexy in their own very put-together and unbelievably young selves! They dress very hip and are out to impress.

The script includes a ton of jargon invented by the writers. The kids on the street were told to listen to it and react, and react they did. They picked up on the actor’s words and flew with it. It made the scenes crackle since the kids on the street are real street racers and they know their stuff inside out! The stunts in the film are meant to make you go -“oooooooooo” and you will indeed be impressed. They range from hijacking the speeding trucks the gang is stealing from so they can get the supplies they need to make their cars the hottest on the street. We also see the bad guys and the things they do to their enemy’s cars.

This film is very popular with the street set and the cool young things out there. If you want to be a cool young thing or just have a fine time with action, explosions, cool jargon and sexy young folk, have a break from studies and go rent this!