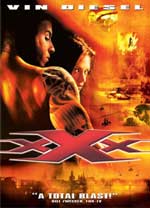 This film is the big action flick that made Vin Diesel a serious name in Hollywood. His salary is now 20 million (supposedly), though I hear the agents, managers and associated expenses chew up the bulk of it. This film has a rather odd effect on me apparently. The following conversation took place as I planned to watch the DVD for this review:

Me: Uh, this one is apparently an action flick. Wanna start with it? It’s called Triple X.
Husband: (with wary look on face) Uh, dear that will be the third time we’ve seen this.
Me: (looking lost) This?!
Husband: Yeah.
Me: Was I there?
Husband: Uh huh.

I popped in the DVD and pretty much watched a half of it. Then I paused it in mid exciting action stunt: “You’re SURE I was here?”

“Yeah. See, the first time you saw the trailers on cable and wanted to see it. The second time I had to remind you of the plot because you’d forgotten it.”

We finished watching the film and the ONLY shot I remembered was Vin flashing a silver tray up to blind a sniper on the roof. (I’m obviously a huge fan of this guy, huh?!) So the plot goes like this. (I’ll write this while my, apparently, fading memory remembers it!)

Vin plays Xander, a heavily tattooed guy and a thrill seeker. He jumps out of airplanes wearing a boogie board, skis down mountains and bungee jumps, etc., and films his exploits for broadcast. There is a thin plot about him having some kind of do-gooder attitude. I hate the fact that I’m sketchy on where he’s doing this (internet or cable TV), and why!

He has tons of buddies and they help him with set ups to let him do amazing stunts. He picks on bad guys and broadcasts this “shame on you” message to the world via this media I can’t get straight in this unbelievably fast moving film.

Stunt hell, or is that heaven, abounds. Great flames erupt from buildings and he flies through the air on a motorcycle (which is just NOT Vin Diesel enough to me — he needs a honkin’ big cool Harley to get my attention). As he’s flying through the air he whips out a gun, hangs on to the seat with one hand and shoots with the other. He then returns to the seat and lands safely. EGAD! I say, take out a condom, do the girl ’till she screams and then call me!! Can’t they up the action out there? (groan)

Xander gets recruited (or is that tricked) to be a government agent by Samuel L. Jackson (wearing one honkin’ big scar). Xander is thrown into situation after situation that the real government guys can’t handle and is forced to travel to Europe to bring down a huge ring that has a nuclear bomb and all kinds of super cool weapons that the prop and special effects team dreamt up! (The absolute favorite is watching the yellow fluid turn green and then black). This is apparently bad news as people die.

Don’t get me wrong; Vin is a very capable and sexy action star. I’m just blown over by the effects, extremely fast dialogue and the unbelievable pace I’m supposed to keep up with. Could I breathe, do you think? Oh wait, I’m supposed to do that in the two kissing scenes. Now remember last week’s review? This is the same director, Rob Cohen. He flunked kissing 101 for directors! The shot that finally gets some serious tongue going on, but there is a huge shadow running over the man’s face just as they bring the camera around then what I see is her head moving side to side. Thrilling!

Of course after numerous ups of action and plot Vin (err Xander) saves the day. He is of course able to disappear to Bali with the girl (played by Asia Argento) and they supposedly live happily ever after! We can enjoy this film if we can mostly ignore the plot and can keep up with the pace! Maybe my fourth viewing I’ll remember it and figure out whom he’s broadcasting to!

Laura Seymour first published herself, at age 8. She has since gone on to publish a cookbook for the medical condition[ Candida. She is working toward her B.A. (Psyc).