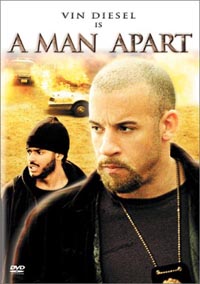 This film starts out like a lot of cop films. The lead character is a tough guy cop, Sean Vetter, played by Vin Diesel. He’s dealing with the scum of society, but is different in that he doesn’t hang around cops and he started out on the wrong side of the law. Then we walk into Sean’s personal life and find a soft man with a fantastic relationship with his wife, Stacey, played by Jacqueline Obradors. They are magic, but the magic is elusive when she is shot in a botched attempt on his meddling cop life.

It begins as Vetter noses around where he’s not supposed to, in pursuit of a prominent drug lord, who is finally brought down by the elite group of cops after more than seven years. Vetter’s finally made the bust, and it feels good. Suddenly there are bad guys at the door and they aren’t bringing wine! They arrive in the middle of the night at Sean’s house and shoot both Sean and Stacey badly. She dies, but it takes a while before Sean can pull himself together long enough to dial for help.

I was more than just a little astonished at her death scene. It took me weeks to describe what I felt during this painstaking performance. I’m sure Diesel’s work must have been improvised, since there is just no way I can imagine someone writing this complex performance. The performance is simply magic. He is blank, says nothing, and left me wondering where he was going with this. Now, I’m the first to tell you that, like a lot of people, I have “internet attention span”! Don’t take long to get to the point with me or I’ll go get popcorn. Somehow Diesel gets around that problem. He left me glued, sucked down the rabbit hole. I finally realized this was like a new lover coming into my life who refuses to follow the “formula” for lovemaking. Suddenly, he’s playing with me and I’m revelling in one orgasm after another, wondering when we’ll finally couple. Except he won’t let me off the hook and I’m just going to enjoy the magnificent ecstasy he’s coaxing out of me.

When Vetter is finally in the hospital and his buddies are able to talk to him they manage to tell him Stacey is dead. Diesel pulls out a nicely delivered cry fest and I figured we’re finally back on track. I can finally get that lover to deliver and get on with things. Nope!

Vetter goes into a drug set up in an open lot. Oh no! He’s back to this long performance and I’m wondering where we’re going again. Again, I can’t leave the screen. Why? What is it about this man’s work here that I can’t walk away from? As you might notice from the other film reviews, I’m not really a solid fan! But now he’s got me. Forever he toys with me. I must be cranking up for orgasm eleven when he finally stops playing with me and loads ups his damn gun to start shooting. Ahhhhhh, finally we get back on track. What a sweet release he is!

The film contains gritty images. Fair warning. The drug world isn’t pretty and the pictures might get a bit tough in a couple of places. Diesel is very connected to his sturdy low-key Brando-like work. Here and there he brings out a touch of his love for Stacey by wiping blood from his ring. He has turned into a drinker/smoker and is not doing so well on a personal level. I would have liked to see the personal destruction dealt with a bit. Would a new widower, for instance, have trouble keeping the house clean or would he perhaps fuss over not throwing out his wife’s belongings? It wasn’t there.

A problem for me was the inoffensive but wholly unsatisfying ending. Vetter has a few words at Stacey’s grave and walks off. I felt a deep sense of being unfulfilled and only felt better when I mentally rewrote the ending and decided that about a year later he meets a lovely woman who, although different, makes him laugh and keeps his interest. After discussion this with Stacey at her grave, he removes his ring and gets on with his life. Vetter has far too much love to be without a woman for the rest of his life.

Still the film is sweet. Rent it. Let me know if you agree.