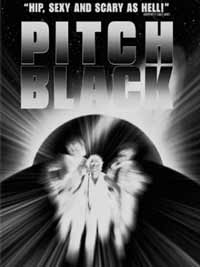 A transport ship holding 40 cryogenically frozen passengers is heading to another world for, among other things, creating a settlement: New Mecca. One passenger, Riddick (Vin Diesel), is a hardass criminal being transported to another cell. There is a very cool introduction to him on the ship — lots of mystery and wonder of where he is from. He is chained up, seated against a wall. (“Ahhh,” I hear the ladies coo, “just where I want him!”). He then bolts up when he is approached by the second in command, and pulls off the scare for us nicely. Riddick is one bad dude and is a prisoner with eerie blue eyes that glow in all light. (I read on one site that an untested pair of contact lenses was developed to cover Diesel’s REALLY dark brown eyes. At the end of the first day of shooting they couldn’t get them off his eyes and an ophthalmic surgeon had to be brought in to remove them surgically. The procedure scratched his cornea! ACK!)

Riddick can see in the dark. He wears what appear to be old aviator glasses during daylight hours. Interestingly, there is a very cool “boy” Jack/Jackie (played by Rhiana Griffith) on board who has a very big crush on the alien man. “He” shaves his head like Riddick and dons similar glasses. Only later do we find out he is a she.

The ship encounters a meteor storm and crashes on a barren planet with only one quarter of the people surviving. Survival is tough since Riddick is now on the loose and there is no water in sight. But as nightfall arrives there is even more to fear: very odd flying creatures. They are like a prehistoric pterodactyl but they have a blind spot that only Riddick discovers. He is able to figure this out when looking at the carcass of one of these beings… ok that’s beyond me but it makes for a cool scene.

Second-in-command Carolyn Fry (Rahda Mitchell) becomes leader when the captain is killed. She also becomes a serious mover and shaker for the story. Riddick cuts off a lock of her hair, just to smell it! Gack! What is this creature about? Since he’s an alien I get to ask that.

A whole pile of actors I’ve never heard of are in this film, but the lack of major names never seems to matter as this film sizzles with surprises and very cool scenes for those who are major sci-fi fans. As to the rest of this film Riddick must later be counted on to guide these people, who continue to get picked off by these creatures, (rather like a sci-fi version of Ten Little Indians from Agatha Christie) to safety. Riddick and the few people who remain, are able to get back to the ship and to safety only after they fight multiple attacks by these monstrous creatures.

Then I bump into the one moment that annoys me in this interesting film. Riddick leans over the prone body of the second in command and tries to help her up. Diesel is known in the industry as being incredibly gentle with women, however his character is a bad guy, so why is he ever so gently touching her and why didn’t the director catch that character boo boo? Wouldn’t he grab her? Wouldn’t he at least be firm?

Moan… I hate to be a picky picky but that bit really bugged me. Catch yourself doing these things Diesel? Watch this film and enjoy.