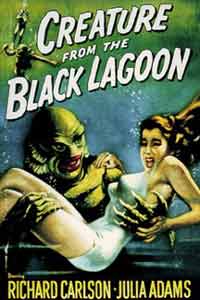 The Creature From the Black Lagoon is a classic creature film — so how could I resist reviewing it for Monster Month? The film has become a cliche for the hokey guy-in-a-suit monster movie, and its gill-man star is now in the classic movie monsters hall of fame with Dracula, Frankenstein, and the Wolfman.

I’ll bet you remember this scene: the star (Julie Adams), decides to take a dip, unaware the Creature is swimming below her. The image is of a powerful masculine guy preying on an overly seductive, but vulnerable, female. Then, from the bottom of the lagoon, the Creature leeringly watches Julie as she swims, and for that one moment, he can only look, not touch. Is he shy or unsure? There are a lot of tame old 50s morals here, or maybe it’s Freudian interpretation?

The Creature’s passion is primal. But he restrains himself, and only caresses Julie’s ankles. He then retreats to the underwater world to watch her bewilderment. Later, in a brief and beautifully filmed underwater shot, he savagely drags the girl into the lagoon — to his bed?

The film was directed by Jack Arnold, who also did The Incredible Shrinking Man and a series of fantasy/horror films for Universal Studios. Arnold’s use of the Creature succeeds by exploiting 1950s fears of unseen threats that came after the wake-up call of WWII and the threat of nuclear war.

The Creature From the Black Lagoon is still fun. Actors Richard Carlson (the paleozoologist) and Richard Denning (the ambitious financier) work well together. Julie Adams is pretty in her custom-made swimsuit. The black & white underwater photography by James C. Haven is surreal in style and works well. Later, men search the black depths of the lagoon and stop now and then to twirl and hover in shafts of sunlight. The camera shows the lagoon bottom as the gillman suddenly springs from clouds of sediment. He is determined to stop the human intruders. The music is really good with themes from Henry Mancini (The Pink Panther) and Herman Stein.

Jack Arnold suggested the design of the gillman suit should be based on the Oscar statuette. The suit was designed by make-up artist Bud Westmore. There were two versions – one for land, and another for underwater. On land, the gillman was played by Ben Chapman. Olympic swimmer Ricou Browning wore the suit in the underwater scenes. The dry suit Chapman wore was made with iridescent greens and blues, and many marine hues. The wet suit for Browning was bright yellow.