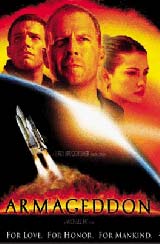 I realized the other day that the majority of films in my collection star Bruce Willis, so I decided that I should do a Bruce Willis month. I therefore start with my personal favorite, Armageddon.

Bruce stars as Harry Stamper, a loose cannon who know how to get things done on his oceanic oil rig. He’s the guy the world gets when they have problems and need them settled. Problem is, he’s a bit unconventional!

Also aboard is his daughter’s boyfriend/fiancé, A.J. Frost, played by Ben Affleck. This film is one of those rare projects with an incredibly well developed supporting cast. The script is rife with incredible monologues and hilarious sight gags. There are moments I want to preserve forever and others that have burnt into my brain and refuse to leave. Perhaps that’s why Armageddon won the 1996 Best Adapted Screenplay and 1997 Best Original Screenplay Academy Awards.

Grace (Liv Tyler), Bruce’s daughter, who steadfastly refuses to call him daddy, is the backbone of the business end of the company. She works well covered in oil from a new gusher and speaks Japanese fluently. Steve Buscemi really floors me as Rockhound. He has some amazingly funny lines and scenes. The killer lines are so funny I all but collapse as he deadpans them. He rotates from being a complete goof to being the genius on the mission. Hulking Michael Clark Duncan is “Bear”, the hilariously sweet big guy that doesn’t fit in with Duncan’s usual huge tough guy repertoire — probably why he took the job. I’d want to play a sobbing guy who bumps and grinds my hips in a medical exam too! Rounding out the team is Owen Wilson as geologist Oscar. He isn’t the most prominent character in the group but he is very interesting addition.

The plot is fun. We’ve got that meteor heading for Earth thing going on. Of course it has to be enormous. The world will be destroyed if we don’t stop it, and the only way to do that is to detonate a nuclear bomb from a channel within the rock. Of course, the meteor is virtually solid iron in the place they mistakenly land. EEK! When they have to drill through it they find that the drill bit they start with hasn’t even made ten feet. They need to make it to 800 feet. The government, unfortunately, doesn’t believe in them and has decided to send along a group of bad guys who will blow them up if the depth isn’t reached in time. That becomes exactly what they plan to do until of course Harry steps in and begins to work out the problem with the head of the team.

In the meantime, poor Rockhound has been tied up with duct tape — to a wall! He insists his insane antics of riding a nuclear bomb and clowning around are fine and that he’s able to detonate the bomb when he needs to. Wisely, no one believes him!

Straws are drawn and A.J. wins, or is that loses, the task of staying behind to blow up the malfunctioning missile. Harry decides to ensure his daughter’s squeeze makes it to the site safely and accompanies him. He, of course, breaks A.J.’s oxygen supply and sends him back to the ship with the instructions to “take care of my little girl”. A.J. is left to return and marry Grace. This is a problem because Harry promised Grace he’d return to the Earth. She is teary-eyed as he calls from the rock to apologize. Troubles ensue when he has to detonate the bomb by himself manually and has no time to get clear. The ship has to take off without him.

This film rocks (oops! Pardon the pun!) and is on the top of my list of giggle-’till-I’m -rying films! Hope you enjoy it too.