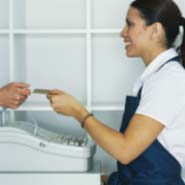 There is a scene in the great 1949 Orson Welles film The Third Man in which the characters played by Welles and Joseph Cotton are suspended in the enclosed cage of what was then the world’s largest ferris wheel. The period setting is the fairgrounds in the Russian-occupied sector of post WW II Vienna — a city of bombed-out buildings, political intrigue, and rampant crime and corruption. Welles’s character is a notorious black-marketeer named Harry Lime, whose sale of contaminated or counterfeit penicillin has resulted in enormous profits for himself and the painful deaths of numerous sick and injured hospital patients, including infants. He is contemplating shooting or pushing from the cage Holly Martins (Cotton’s character), a childhood friend of the racketeer’s who is outraged by Lime’s actions and has threatened to turn him over to the authorities. With smiling contempt, Lime defends his callous actions by pointing to the crowds of fairgoers far below. He refers to them as “dots”, and ask Martins if he offered him twenty thousand pounds for each each dot, whether he would really care if some of them stopped moving, or whether he would “calculate how many dots you could afford to spend, free of income tax.”

It’s a scene that has always gotten under my skin, because I think that it contains a fundamental and chilling truth about human nature. Although we don’t like to admit it, there’s a little bit of Harry Lime in most of us — it’s just that we’re generally not honest enough or self-aware enough to actually admit it. Except for the very best and committed amongst us, we more or less share his sociopathic ability to turn a blind eye to the consequences of our lifestyle choices. No matter how kind or compassionate we may be on an individual basis, we tend to objectify and dehumanize others and conveniently ignore their suffering, as long as it suits the purposes of our endless pursuit of “the good life”.

Most of us, for instance, would be appalled to actually see children as young as eight or nine years old removed from their families and deprived of education, working from morning to night on sweat shop assembly lines for wages barely enough to keep them alive. Yet at the same time, we don’t think twice about visiting Wal Mart or the dollar store down the street to buy the fruits of their labours and keep this cynical exploitation going. We all know, or should know, where those “Made in China” trinkets and googaws come from, and who is really paying the price for them, but we ignore this because we all love a good bargain or a “special offer”. We all want those half-price “designer towels” and cheap espresso machines. Likewise, most of us agree that protecting our environment and preserving the integrity of our food sources is vitally important. Yet we continue to buy genetically engineered foods, pesticide-laden produce and useless products that ultimately wind up in landfills.

It’s tempting, of course, to put the blame on others. We tell ourselves that it’s not our fault, that we’re just trying to get by and that we don’t get paid enough to purchase ethically produced products. With our busy lives, we just don’t have the time to sit down and research our consumer purchases. It’s not us, it’s the marketers and advertising agencies, the shadowy multinational corporations.

But the truth is that we do have a choice. The power to change the world resides in our purses and our wallets. For every cheap trinket or flashy gizmo that we buy, we have the choice of finding an ethically produced alternative or simply walking away from them. Every day there are more and more socially conscious businesses setting up shop. There are fair trade/shade grown coffees, GMO-free foods, handcrafted cheeses, locally-produced clothes made by employees who at least get paid what passes for minimum wage in this country (although this is still inadequate). There is a staggering amount of information in every bookstore and on the internet to help us to make more informed buying choices. All it takes is the willpower and resolution to make a few simple changes in our lives — to accept the fact that if we don’t want to support child slavery and foot the bill for the slow contamination and destruction of our planet, we must learn to take responsible for our actions. We must be willing to look harder, pay a little bit more, or simply walk away from things that we don’t really need. It’s all up to us.