Articles
The Voice
Nature Notes – From the Backyard to the Biosphere. Kudos to the Cucurbits

The term Cucurbitaceae may not sound immediately familiar, but the species within this plant family are some of the most conspicuous at this time of year: the squashes, gourds, melons and, last but not least, the glorious pumpkin—Cucurbita pepo. Halloween, to many, would be nothing without this emblematic fruit. The Jack O’ Lantern, with its varied expressions of joy, anger and silliness, now defines one of our most interesting holidays–the celebration of spirits, ghosts, goblins and horrors of all kinds.

The pumpkin is, for such a very short period of time, on display in all of its charming, rotund loveliness. Country farmers and city grocers alike seem to take special pride in the complex art of pumpkin arrangement. Plastic models of the pumpkin have been crafted into candy containers for the young; orange plastic bags with stylised faces, waiting to be stuffed with newspaper or cotton, have been created as home decorations; pumpkin stickers abound, ready to be displayed in the windows of those signaling the neighbourhood that they are open for Halloween fun. What surer sign of admiration for a plant could there be than this flattering mimicry of its unique charms?

In homage to this symbol of the season, won’t you embark with me now on a journey of discovery into the history of C. pepo and family? The Cucurbitaceae family, with over 800 species, is characterised by soft- (although often prickly-) stemmed , mostly vine-like plants. Highly prolific, just a few seeds of the cultivated varieties planted lovingly in the garden can produce far more fruit (and cover far more territory) than most people are willing to deal with.

But its staggering growth is, in fact, what has made this plant family so important to humans. The indigenous people of North and Central America have been cultivating members of the squash family for hundreds of years. Squashes were so important to the Iroquois of the Great Lakes area, for example, that these plants had their own spiritual significance as one of the ‘Three Sisters’: along with corn and beans, the squashes were seen as vital beings in Iroquois society.

And no wonder: with 10% protein by weight, prolific growth habits, and great agricultural properties, these plants are wonders of the agrarian world. The squashes, grown by the Iroquois in hills amongst the corn and beans, would shade out unwanted weeds with their big, broad leaves, protect the underlying soil from erosion, and act as a living mulch, helping to maintain crucial soil moisture levels.

Of course, the squashes and pumpkins are useful for far more than just food: masks, dishes, carrying containers, and musical instruments were once made from these versatile fruits. White settlers found their own uses for the cucurbits as well: tea made from pumpkin seeds was used as a remedy for those suffering with worms, and insect repellant for livestock was made by rubbings from the plants’ leaves.

How versatile is the lowly cucurbit! Its thick growth can be used to advantage to hide ugly spots in the garden; its flowers produce vast quantities of nectar and pollen for the bees and moths that pollinate them, and can be used as flavouring in soups and stews; its flesh can be made into all sorts of pies and breads; its seeds are some of the best-known providers of key nutrients; and its carved shell is a harbinger to the young to come and get their fill of Halloween tricks and treats.

Orange and yellow, warty and misshapen, the squash family holds a special place in our hearts. Take a moment to raise your glass to the melons, juicy and sweet, the gourds, bumpy and brown, the zucchini, squishy and tasty, and, of course, the pumpkin, shiny and bright, and, at this time of year, sporting an expression that says nothing if not ‘I know, aren’t I beautiful?’. 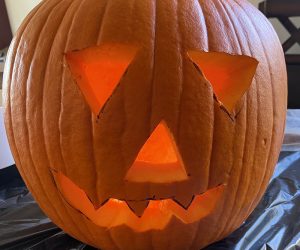 Something Festive This Way Comes…