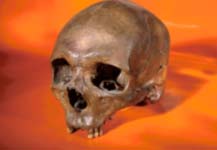 The answer can potentially be found in a nine letter word: Evolution. But what, exactly, does this word mean? How can this concept of changing life forms result in the species diversity and variation we see in our world today? Athabasca University’s new course, Human Evolution and Diversity (ANTH 278), will answer these and many other questions for you. A 3-credit course in the Social Sciences, ANTH 278 starts right at the beginning of human evolution, following it through its many stages to modern times.

ANTH 278 is divided into five parts, each exploring a different concept or historical time associated with our evolutionary history. First, you’ll gain background to the “basics” of physical anthropology–in other words, what it means to evolve and how this can be achieved across the centuries. Once you arrive at the second part, you’ll be primed and to delve into the history of evolutionary theory. What was Erasmus Darwin’s role? How about Charles Darwin? Did the Darwins conceive evolutionary theory, or was it deduced by others long before? What, exactly, was all the fuss about Darwin’s Galapagos finches?

Part three of the course focuses on the behaviour of primates: how they function biologically, socially, and with the surrounding environment. How are they similar in these aspects to modern-day humans? So far, you may have wondered where human ancestors, come in. Wait no longer! The fourth section of ANTH 278 masterfully discusses pre-hominoid beginnings (that’s where all the Neanderthal and “Early Man” excitement comes in!). You’ll be introduced to the common ancestor theory, and comparative anatomy and physiology, as well as the progress in human evolution over the centuries. Finally, you’ll wind up your evolution-based learning adventure by touching on concepts of variation and adaptation.

Your course grade in Human Evolution and Diversity is calculated through 3 lab-style assignments (in my opinion, these hands-on assignments are the most fun!) worth 60%, one telephone quiz (worth 5%), and two exams (midterm and final), totaling 15% and 20% of your mark, respectively.

Assistant anthropology professor Sheila Greaves specializes in physical anthropology–in other words, the subject matter of ANTH 278! Dr. Greaves is sympathetic to the needs of AU students, having finished her PhD on ethnicity and Canadian aboriginal cultures via distance education. In addition to teaching ANTH 278, she also currently tutors several other anthropology courses, including the Archaeology of Ancient Peoples (ANTH 277), the Inuit Way (ANTH 307), Ancient Civilizations of the Americas (ANTH 318), First Nations of Canada (ANTH 362), History of Anthropological Thought (ANTH 434), Alberta Archaeology: Prehistoric Lifeways (ANTH 376), Urban Anthropology (ANTH 394), and Archaeology: Principles in Practice (ANTH 476). Dr Greaves is also currently active in anthropology-based literature, and has written several publications. If you’re interested in more information on Dr Greaves, you can visit her webpage at: http://www.athabascau.ca/anthropology/staff/sheila.php

Discover theories about your ancestors’ early beginnings! Wonder about evolution no longer! Enroll in Human Evolution and Diversity (ANTH 278) today.

For more information, visit the course syllabus at: http://www.athabascau.ca/html/syllabi/anth/anth278.htm

Alberta’s Budget Cuts—Affecting So Many

Editorial—Hold on to Your Wallets!

The Study Dude—Cure Yourself of Exam Anxiety

Dear Barb—Faced with the Unthinkable

The Fit Student—Scoring Top Grades is Like Dating Your Soulmate