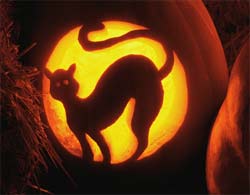 It’s dusk at Grandview Park, the heart of Vancouver’s bohemian Commercial Drive neighbourhood, and the mummers are beginning to gather. Beside the usual vampires, mummies, wizards and catsuits, there are towering stilt-legged ravens, bicycle-riding dinosaurs, a bizarre snowy white creature with the wings of angel and the head of a wasp, and a huge assortment of grotesque, beautiful and just plain silly creations with fur, horns, and enormous paper mache masks.

Throughout the park, wraith-like figures dance around bonfires. There are witches gathered about smoking cauldrons. A Cirque du Soleil-style clown plays a wheezy-sounding concertina and leads a group of dancers as they snake through the crowd of several thousand celebrants preparing for the Parade of Lost Souls.

A neighbourhood-driven event, the annual parade is an intertwining of several different cultural traditions, including the Mexican Day of the Dead, All Saint’s Day, pagan celebrations, and North American Hallowe’en festivities that feels both ancient and futuristic. In honour of the event the homes and gardens up and down the parade route have been transformed into a sort of alternate reality. Apartment balconies draped with white sheets become shadow-puppet stages. A man sits high in the branches of an elm tree singing strangely haunting songs about pumpkins and destiny.

There are numerous shrines dedicated to the memories of the deceased. One house is decorated with illuminated screens on which are amazing pen-and-ink drawings of lungs, brains, spinal columns and other body parts that look like illustrations from a renaissance scientist’s notebook – a reminder perhaps of the fragility and beauty of the human body. Old black and white photographs of long dead people in antique dresses and headgear (the homeowner’s descendants?) are displayed on a table and projected onto a wall.

For one night every year these streets in the heart of the city become a place of strange mutations, where men and women may be transformed into beasts and spirits, houses into shrines, life into death. It’s a land that is a little-acknowledged but essential part of our world, a place of magic and dark enchantment that lies in the shadowy recesses of all those comforting fairy stories we grew up with, and just beyond the map of our conscious perception of reality. It’s a world far more fantastical than our day-to-day vision of the cosmos, and yet essentially far more true to the wild and messy nature of existence.

This irrational place is a territory through which children, who are more open to the possibilities of life, tend to navigate with far more intuitional ease than most adults. Perhaps it’s something that most of us are taught to outgrow. Located outside the realm of rational understanding, it is the region of consciousness that poets, visionaries and shamans travel to in search of some of the wilder varieties of beauty and truth. There is, in fact, something both childlike and shamanic about that part of us that is driven to participate in events of this kind – moved to celebrate the darkness and wonder that is all about us, to honour those who have passed before us, and to reflect upon the value of the gift we’ve been given. Hopefully it’s a part of us that can never be completely lost.