The sex workers’ guild is seeking support from the Canadian Union of Public Employees, the largest union in Canada, representing more than half a million workers across the country. They have also petitioned the Canadian Labour Congress, an organization that represents 2.5 million workers from 60 national unions, including CUPE.

While the sex workers are still awaiting confirmation, Clamen is optimistic. “We’re in discussion with CUPE right now,” she said. “Hopefully within the next few months we’ll know if they’re going to do a campaign” for sex workers. CUPE has officially endorsed the full decriminalization of sex work in Canada, said Joe Courtney, head of the equality branch of the national union.

The illegality of sex work in Québec is still ambiguous. Although it is not technically illegal to exchange sexual acts for money, it is forbidden to solicit prostitution and to use its profit for personal income.

Valerie Boucher, a project manager at the Montréal-based sex-worker organization Stella stressed many of the physical dangers sex workers face are due to the lack of legal protection in their work. “If there’s a lot of repression, you’re going to take less time to look at the men you’re dealing with, and it’s going to be more dangerous,” said Boucher. “If you work in a strip bar and your boss is abusive, it’s hard to know where to go.”

Although in 2001 the Canadian Labour Congress passed a resolution putting CUPE at the forefront of the fight for decriminalization, it has yet to make sex workers a priority, said Clamen. According to Clamen, the main goal of the guild and of CUPE is to ensure sex workers are protected in the same way as members of other labour organizations.

“What we’re doing is talking about sex work as work, and talking about it within a labour perspective,” said Clamen. “Once people do that, then they think about what they can do to improve their working conditions.” “Sex workers should have the same protections as other workers,” agreed Courtney. “This includes minimum income, social security . . . freedom from discrimination . . . and the right to union representation.”

Clamen said the guild is currently taking action to improve working conditions in the sex industry. “We’re working with sex workers to address grievance procedures to contest any discriminatory practices taking place in their work place,” she said. “We are also helping them institute codes of conduct within their clubs.”

According to Boucher, one of the main obstacles is the public stigma attached to the work, which denies sex workers their basic human rights.

“We don’t necessarily need to decriminalize the sex industry before sex workers are granted fundamental human rights,” she said. 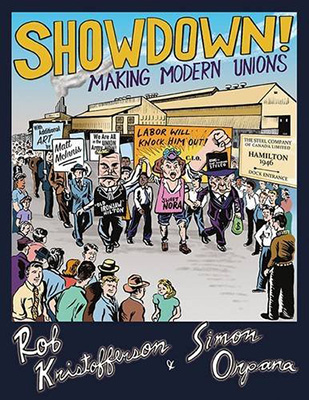