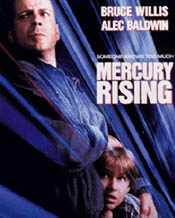 This film is a real departure for the very good-humored Mr. Willis. He first appears as a scruffy guy in army fatigues–almost Fidel Castro-ish–FBI agent, Art Jeffries. I found myself liking his bearded and burly look. Then off it comes and he’s in a business suit… ah well, whatever.

Bruce looks older than he normally does and I wonder if he’s had “work” done since then. I don’t care–I’m just curious. He is so slim now and looks much more “radiant” (I’m sure men shouldn’t be described in that way, but he does).

The plot of Mercury Rising goes like this: Art was present at a hold up in another city and never got over it. He has a huge piece of baggage regarding children and can’t cut it loose. Along comes his next case. A little autistic boy, Simon (Miko Hughes), is the only person to unscramble the most complex code devised by the government. The government has set up a phone number within a puzzle book they hid the code in “just to make sure” no one can read it. When little Simon ends up calling “the stranger” after dialing the number hidden in the puzzle book, they trace his call and the next thing you know the bad guys come and kill Simon’s parents. The government doesn’t like the fact that anyone can untangle their precious code.

This is when Art gets on the case and he arrives only to find Simon hidden in an attic wall. Simon has one little problem– if he doesn’t recognize someone from his little picture list, he screams if they touch him. This creates a bit of a problem for real-life dad Mr. Willis, who has to carry the screaming, kicking child around to get him away from the bad guys who are now on their trail. Soon, after an inconveniently timed nap, Art realizes the child is missing.

Simon is quickly found but Art realizes he’s going to need a little bit of help. He goes into a coffee shop to get Simon his cocoa drink and recruits pretty shoe saleswoman, Stacey (Kim Dickens) as a reluctant babysitter, who also lets the child escape for a time. Soon after though, Art returns to Stacey, this time at a ridiculous hour at her home. He begs and pleads his way in and then finds that she can handle Simon really well.

Art is back on the run again soon after and connects to a buddy in the force who allows him to “steal” his car until morning. Soon Art is on run again, first on the Chicago L train, then in an ambulance where Simon won’t stop playing with the siren.

As you can, of course, guess all turns out okay, but as usual my mouth is shut on how.

Willis’s character has the added complication of being addicted to some prescription pills for the early part of this film, but his kicks his habit midway through and chucks the pill bottle out a window.

I enjoyed this film and enjoyed seeing Bruce in such a “human” and believable appearance. It’s a shame so many actors don’t let themselves look “real”. It makes me cozy to see people in show biz look like real people.