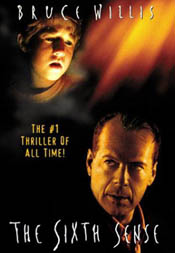 There are few films gave me the incredible gasp I had as I found the “solution” to this one. This one grabbed me by my breasts and wrung hard! OUCH!

Bruce Willis, as Malcolm Crowe, is a happily married man who starts to have some problems when he and his wife go upstairs for some nookie one night. A former client of the child psychologist, (Vincent Grey, played by an absolutely unrecognizable Donnie Wahlberg, Mark Wahlberg’s brother) emerges from the bathroom to interrupt the happy couple’s strip tease. The now grown boy is stripped down to almost nothing. He is very upset and Bruce knocked me flat with his performance as a nervous man trying to deal with an upset person.

It takes him a while to remember who this guy is. When he finally realizes the name and case he winds up shot and the client then commits suicide in the bathroom. The entire scene is brilliantly set up so that people who are nervous about gory blood stuff don’t have to freak out.

We back out of the bedroom as his wife tries to deal with Malcolm’s injury. Then we rejoin him a year later as he is working on a case of a small boy, Cole Sear, played astonishingly well by Haley Joel Osment. Cole is not able to really enjoy his world. The boy has many of the same problems that the dead ex-patient had and Malcolm thinks he can redeem himself by helping this boy, who has all kinds of strange “behavior” problems. His mother keeps finding all the cupboards open, and her son is the only possibly suspect. It takes a long time before his mother will really believe he’s not doing these things to her. Some brilliant dialogue occurs when the nervous child asks his mother more than once if she is angry with him. She assures the child with the same wording every time. “Look at my face” she tells him, and then asks him if it looks like an angry face. It is a wonderful touch to the film.

A long while later Malcolm finds out that the child “sees dead people” as the now famous line reads. He delivers the line in incredible awe and leaves us beautifully creeped out. Unfortunately Malcolm thinks the child is delusional and dictates that he may need to be medicated and hospitalized.

Brilliant director M. Night Shyamalan puts the film together in such a way that we do not suspect the brilliant end to this film. It grabs you and makes you shudder.

I love this film and highly recommend owning and watching it, especially on ghostly holidays like Halloween.