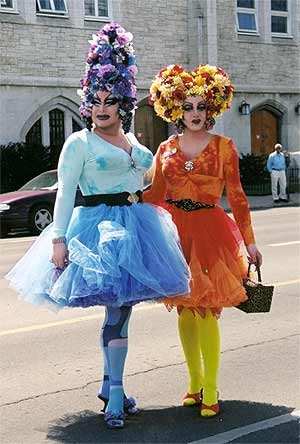 As temperatures dip lower, and advertisers mount their annual Christmas season assault upon the shopping public, the parades of last summer may have become merely a distant memory. Certainly one of Edmonton’s most interesting and dazzling public spectacles of the summer was the Gay Pride Parade, held on June 19th, 2004.

Aside from drag queens and a large dose of self-deprecating humour from the gay community, many groups promoted responsible sex practices and education about HIV/AIDS. PFLAG, or Parents and Friends of Lesbians and Gays, marched in support of family members and friends who just happened to be born homosexual. Other parade participants represented businesses, cheering squads (including one from San Francisco), and political parties of many stripes.

Both the federal and provincial Conservatives, however, were conspicuously absent. That was not surprising as the Conservatives have never been known for their sense of humour, especially the newly minted federal party headed by the pathologically bland Stephen Harper. Edmonton’s then mayor, “Smiling” Bill Smith, who for years had refused to declare a Gay Pride Day, was also absent, perhaps due to his terminal lack of imagination.

While some politicians failed to support equality, several church groups and other Christian groups marched in favour of gay rights. No doubt this will surprise some people who see religion as a platform for anti-gay bigotry. Yet, a number of religious groups, including Unitarians, Lutherans, and United Church of Canada members, drew enthusiastic applause from the spectators. 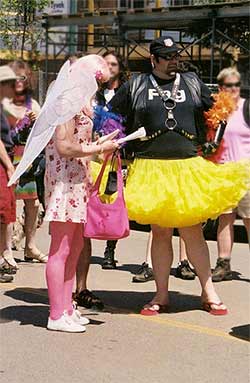 Several blocks of Edmonton’s Jasper Avenue were jammed with supporters of gay rights. The Edmonton Journal estimated that 5,000 people had turned out to see the parade.

The crowds included gays, straights, families with children, and even family pets. In fact I attended the parade with my wife and her parents. It was, in spite of assumptions to the contrary, a real family event!

And of course, there were protestors, although very few in number. A pair of flamboyantly attired drag queens outshone a trio of protestors spotted in front of St. Joseph’s Basilica. Towards the end of the parade route, another man held a sign proclaiming MAN + MAN = ZERO, as if human reproduction was about to come to an abrupt end.

In spite of fear mongering and homophobia, the Gay Pride Parade was a splash of colour in conservative Alberta, Canada’s otherwise uptight Bible belt. For one day last June, it was possible to forget the bigotry, and just enjoy the spectacle.

Many church groups and individual Christians took part in the Gay Pride Parade. Some churches actually have a mandate to include gays and lesbians in their membership. Edmonton’s McDougall United Church is one such congregation.

As a Christian faith community in downtown Edmonton: We are rooted in worship that continues to reflect a pioneering spirit through innovative and traditional liturgies, variety in music, and the active engagement of the worshipper.

We are committed to accepting into fellowship and, according to their gifts, into leadership, persons of any race, gender, age, sexual orientation or disability. We are dedicated to programs, services and opportunities which nurture spiritual and theological growth, and which demand we work toward a more just, responsible and compassionate society. We actively and prayerfully seek partnerships within the wider community. We believe God is not limited to the notions of the past, nor of our own time. We recognize that our knowledge of God is partial and confined, and there is yet more truth to be discovered.

Such is the joy and excitement of the Christian quest of McDougall United Church.