Articles
The Voice
In The Spirit of the Season

Special Alert: I don’t think anyone could really have seen this coming, but apparently Christmas falls on December 25th this year. This means that anybody who’s planning on sending me cash or gifts had better get a move on.

But try to remember that this season is, after all, about much more than my own personal enrichment. For me, Christmas is a special time of spreading heartiness and good cheer. A time of sneaking into corporate cocktail parties and downing as much free eggnog and Cornish game hen as I can lay my grubby hands on before somebody notices that I don’t work in accounts receivable. A time of nursing particularly severe hangovers and yelling out my window to let the neighbourhood kids know that ten o’clock on Saturday morning, or any other morning, is not an appropriate time to be singing and playing in the street.

It’s also a period of soulful reflection, of nursing grudges for all the little injustices that have been visited upon me throughout the year. One of my particular resentments this Yule season, for instance, is the nagging thought that if my father had only been a real dickhead–and one of the most hated politicians in the history of Canada–I might today have been a media celebrity like, say, Ben Mulroney, instead of pursuing a career selling bogus hair replacement treatments. Oh well, nobody ever said life was going to be fair. But, hey, other people have suffered too. The main thing is that I’m able to smile and move beyond my personal pain.

One of the ways I’m able to achieve this state of personal transcendance is by thinking about all the little people out there, considering others instead of just myself. That’s why I’ve been thinking about my neighbour, Cecil Idris Idris Jones, and alternating between seething with resentment about the new Saab sitting in his driveway, and chuckling over the fact that he broke an ankle tripping over one of his imported Italian garden gnomes and hasn’t been able to drive it.

In fact, this year I have made a determined decision that I will spend a minimum of eight minutes per week over the Christmas season finding ways to help others. One of the ways I intend to make the world a better place during this festive season is by being brutally honest with those around me. If I see somebody with overgrown nasal hair or pants that are too tight, I will no longer keep my opinions private. If this altruism turns out to be as enjoyable as I suspect, I may even continue it on into the coming new year.

May the joys of the season be with you. 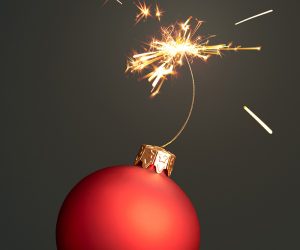