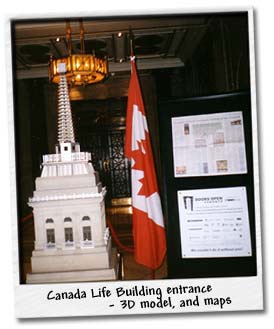 “Where the doors open for a weekend each year, during the spring season, brightening up the town with plenty of joy and cheer,” [1] I recalled, as I thought of continuing my spring travels in Toronto. This year, however, instead of traveling around with my backpack, I decided that I would trade it in for something different, and chose instead to help other travelers in the city…

My venture began a few weeks before the day of the “Doors Open Toronto”[2] event in May. On the overcast Saturday morning, I arrived at New City Hall. Inside of the building, there was a large group of people, eagerly wanting to help out on event day. As everyone picked up their volunteer information packages about our assigned locations, we waited to gather in the city council chamber for the presentation, which began shortly afterward with a short video highlighting the city of Toronto and ended with guest speakers highlighting the importance of helping out on the fifth anniversary of such an event . “Wow, I never knew the need to help out on an event such as this!” I thought.

Before I knew it, time had passed and it was the day of “Doors Open Toronto”. So, on a sunny spring Saturday in May, I was set to begin. Dressed in my blue and white volunteer shirt with my volunteer name tag hanging around my neck, I boarded the subway to my assigned location. On the way, I quickly re-read the information sheet about the location I was assigned to: “At 17 stories and 280 feet, it was the tallest building on University Avenue at the time”, I read from the list of facts, trying to remember as much as I could about the building.

Arriving early at the location, I decided to have a look around my assigned location. From the outside, I looked up to see the lighted weather beacon forecasting the clear weather of the day. Inside, I noticed the beautiful Roman columns and high ceilings that flanked the entranceway. 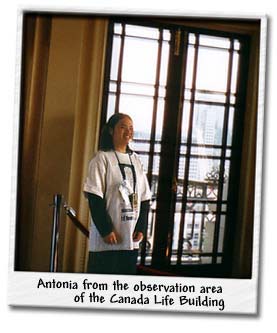 Seeing a short lineup for the elevator ride, I decided to take the elevator to the enclosed observation area on the top floor. Looking out the floor to ceiling windows seventeen stories above the city, I could see the CN Tower, with Lake Ontario in the background from one side, and the giant buildings towering over the downtown core of the city from another. On the ceiling of the observation area was a giant chandelier high above. Slowly, the sun began to shine through the clouds and a slight breeze blew through the open windows, creating the perfect viewing conditions for the day.

Heading back downstairs, I went to the area where there was a movie presentation about the building. People sat in the room with their eyes glued to the screen. Through a series of short clips, the movie depicted life during the early days of life in Toronto and told about the history of the building’s construction. In the same room, there were display areas where people could walk around and look at the artifacts taken from the original offices.

When it was time for my shift at the Canada Life Building in the afternoon, I stood in front of the giant mahogany doors behind the iron gates.

“Hello. Welcome. Straight ahead to the elevators; turn to the right for the movie presentation about the building,” I said politely to the crowds approaching the door. I stood in the doorway holding the door open for the visitors, from babies in carriages to seniors in walkers, from people who were familiar with Toronto, to foreign travellers. People of all ages, cultures and backgrounds came through the doors. It seemed as though everyone wanted to participate in the Doors Open experience! 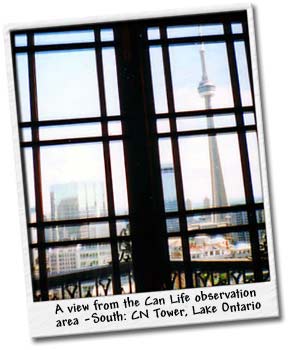 “Can such an insignificant gesture as opening the door and greeting people make a difference in the city?” I wondered.

Just when I thought I was about to give up, more crowds continued to trickle through the doors, asking questions such as “When was this building built?”, “Where can I find more information about Doors Open?”, “What are some of the other Doors Open Toronto buildings located around here?”, “What can I do when I go inside the building?”, “Why is it called the Canada Life Assurance Company Building and not the Canada Life Insurance Company Building?”, “What do the different coloured lights on the weather indicator mean?”, etc., the visitors were eager to learn!

Suddenly, a limousine pulled up at the front door, and a huge crowd of people emerged. One by one, women in fancy dresses climbed out of the car, followed by men in tuxedos. A photographer climbed out last, draped with photography equipment, and proceeded to set up in front of the building. Posing for the camera, the bride, groom and the rest of the wedding party stood in front of the Canada Life building, using it as a scenic background for their wedding photos. Some of the passers-by asked what was going on, as there was quite a commotion out front. I told them about the Doors Open event and proceeded to guide the crowds past the wedding party and into the building. Despite the commotion in front of the building, the crowds were even more eager to tour the Canada Life building.

Before I knew it, the day was over as quickly as it began. Sadly, it was time to turn away people who wanted to enter the building. As the last group of people left, I was left in awe as to the impressive turnout of the amount of people who visited the Canada Life building today. “2000 people came to the building today,” I heard one of the other volunteers mention. 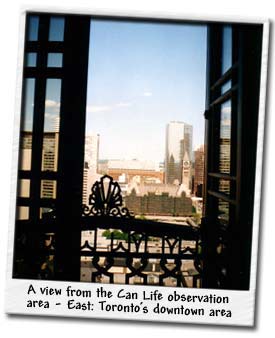 With the crowds gone, I took one last final elevator ride to the top of the building and had a “private tour” with the group of volunteers who were also working on the building that day. “Click.” With my camera I captured the memories of the day in this majestic landmark.

As I look back on that sunny day in May, I look at the photographs laid out on my desk and see magnificent scenes of Toronto. I close my eyes and imagine closing the giant mahogany doors on the travels of the day, hoping to re-open them again another year, with a “hello” at the door…