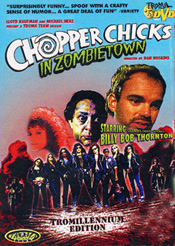 This film begins a new year (Happy New Year!) and starts the month of horrible films, which I picked because January weather can be so awful. At least, that sounds like a good excuse! I’m sure we’ve all seen them and that begins a squabble with some of you. I won’t argue with you. I’m sure many of you have votes that are justified for films that should be reviewed as true stinkers.

Chopper Chicks has a problem from the beginning. The budget is obviously rock bottom. There isn’t a name actor in there (well, none that were names at the time). Jamie Rose as Dede or “Face” is the star and has done a few good films. She is at least a pretty and capable actress. I like her look. She is a pretty redhead who manages to skirt around being a ditz or flake all the while being very attractive. Catherine Carlen as Rox is so tough as the lesbian gang leader that she is frightening. Her performance goes over the top, but then whose doesn’t in this film? Rox does a ridiculously sultry song in a bar that all but has her climaxing to the tune. There are no lyrics on the jukebox she’s singing to–when was the last time a karaoke bar leased a jukebox? I suppose I should be glad she’s not singing against the singer but it annoyed me in so many ways.

A virtually unrecognizable Billy Bob Thornton is Dede’s husband, apparently missing his pretty wife. He has a few lines here and there but unless he opens his mouth and says something (as opposed to kissing) you won’t figure out who he is right away. His performance works but it’s far from brilliant. Don Calfa as Ralph Willum is best remembered as the hit man who couldn’t seem to kill his target in Weekend at Bernie’s. In this film he gets a butt shot and turns into a mad scientist kind of guy as he installs a “battery” in the brains of the people he murders. This turns the people into leg dragging zombies.

I found myself wondering if the music was the worst thing about this movie, but no, there are some really crappy script points that beat out the score for that honour! I found myself moaning over the blind orphans trapped in a broken down bus being attacked by the zombies. Who couldn’t see that coming?! [Ed: Presumably, the blind orphans… Heh. Couldn’t resist!] Add to this the delightfully trite moniker of the girl’s bike gang: Cycle Sluts. Of course they are all crazy to have sex with anything that walks–although that may be overstating things as they don’t seem willing to settle for the zombies. Adding to the cheese factor, a blind orphan comments on the “midget” hit man, only to have the little person remind him that the proper term is “dwarf.”

One good point is that the script does have the requisite character development even if it is served up in occasional heaps rather than smaller, more believable doses.

To make the killer Cycle Sluts into better characters the script then ends with the girls driving off with a pile of money from the townspeople for saving their town. That’s just fine, but flinging the money over their shoulders onto the highway as they drive off doesn’t strike me as a fitting action for the character of Rox.

This film tries too hard, suffers from an unbelievable story, handled in a trite manner and lost me with its clichés. I wanted to see a low budget film that impressed me but I got let down. If you see this movie and have a different opinion (like The Voice editor does!) [ed. I laughed my ass off!] please let me know. 89 minutes of your time is needed.