Columns
The Voice
The Good Life – Magic in the Streets

For the first time since I was five years old, I went Christmas caroling this year. A friend of mine has a birthday on December 18th, and this was the way she wanted to celebrate it. To be honest, I was a bit daunted by the prospect. It’s not that I wasn’t in the Christmas spirit, or that I’m a bad singer, but most of the twenty or so others who would be joining us are really terrific singers. You see, my friend sings in a very well-respected sixty-piece gospel choir, and I’ve seen her and her fellow choir members come close to raising the roof off of more than one venue. To up the ante a bit, the route we would be taking was along West Fourth Avenue, one of the busiest shopping areas in Vancouver. And to boot, we would be doing “guerrilla” singing visits to local businesses, such as grocery stores and coffee shops. There were visions of customer complaints and potential restraining orders dancing in my head. I still have a clear memory of belting out what I thought was a soulful verse of Good King Wenceslas in the back row of my elementary school choir during rehearsals for a Christmas concert. The music teacher signalled us to stop, peered over the top of his reading glasses, singled me out, and asked me to stay during recess for some extra coaching. So it was with a few butterflies in my stomach that I bundled up, along with my husband and daughter, in hats, scarves and long underwear, and set out for my latest caroling adventure.

As it turned out, I needen’t have worried. Once we had a few glasses of mulled wine inside us and hit the streets with a rousing version of Blue Christmas, complete with Elvis Presley impersonations, it felt absolutely wonderful. We carried candles wrapped in tinfoil and were led by a friend playing a recorder. It was a glorious mingling of voices, operatic and gospel-inflected, trained and untrained. There were eight or nine children with us, who belted out the songs with a joyful enthusiasm that made me ashamed of having had any inhibitions myself. We were applauded from balconies and living room windows. My seven year old daughter got rave reviews for her top-of-the-lungs version of her all-time favourite, Go Tell It on the Mountain, even adding her own personal stamp by substituting the improvised line “I’m surprised that he is born” in place of the more traditional “Jesus Christ is born”. The Little Drummer Boy and The Holly and the Ivy were haunting. Jingle Bell Rock and I Saw Mommy Kissing Santa Claus (Sigmund Freud’s classic song) were belted-out with unparalleled gusto. The highlight, though, as everyone present agreed, was a strangely moving version of You’re a Mean One, Mr. Grinch that, as my husband said, might almost have been arranged by Tom Waits during an acid trip.

For two straight hours we walked through the streets of Vancouver’s Kitsilano neighbourhood, singing and laughing, until it was time to head back for birthday cake and more wine. By the time we got home later that night, our throats were raw and our clothes were covered in splatters of candle wax. All-in-all, it was a fabulous night, and it left me with an understanding that the most memorable times are often the ones where we throw ourselves into situations that we may not be quite comfortable with. Sometimes you just have to take a chance and go with the flow. As I’m constantly discovering, that’s usually where the magic is. 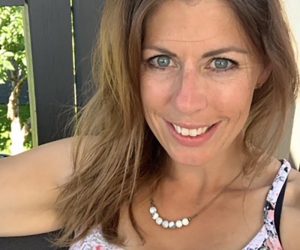