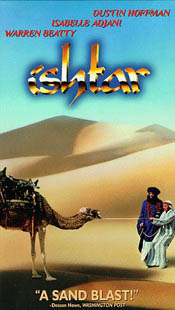 This is just a big mess.

Someone thought that Warren Beatty and Dustin Hoffman would be an incredible team on screen and figured “who cares about the script–they always bring in the money!” Or so it seems anyway. My concern is how they managed to sucker these two more-than-capable actors into performing in this crap.

The plot goes this way. Two lounge singers–and they are awful at the job–get booked to play the Ishtar Hilton, somewhere in the Middle East. Somehow, they become pawns in an international power play between the CIA, the Emir of Ishtar, and the rebels trying to overthrow his regime.

The film has horrible jokes, overacting and the worst thing of all is that the adoration that some people have for the two stars actually leads them to call this film a work of comic genius. This is far from the truth. Hoffman and Beatty go to great lengths to make the film work but fail miserably. They overact and work too hard to sell the jokes — the crawling across the desert scene, for example, is just tragic.

The director, Elaine May, previously directed Robin Williams in the well received remake of The Birdcage, and previously wrote screenplays for both Beatty and Hoffman — Heaven Can Wait and Tootsie respectively–both of which were very successful. This most likely explains why the megastars agreed to appear in this horrid project.

Most of the other actors are not especially well known however Matt Frewer (who used to star in the Max Headroom TV show), Tess Harper, Isabelle Adjani (a huge star in France) and Gharles Grodin are in it. I would bet that most of the budget was used on the two main stars.

The film was supposed to be in the style of the Bing Crosby and Bob Hope productions of the 1940s, but was plagued by production problems and budgets hold ups.

Crazy lady, Carol Kane, is in this too. Oh well. I wish it helped.

This film is at the top of the list of stinkers for many but some still think it’s ok. The Razzies (horrible film awards) nominated it three times and the Rotten Tomatoes also ranks the film as “Rotten.” Generally this film is rated at 3 to 4 stars out of 10 and still gets many nominations for poor quality programming. What’s your impression? Tell The Voice.