Articles
The Voice
My Hero Clint 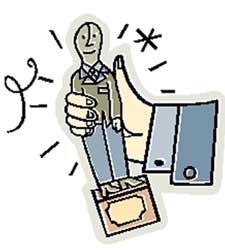 It was great seeing my hero Clint Eastwood accept the Oscars for Best Picture and Best Director the other night. I have been an enormous fan of his work since the days of Hang ‘Em High and The Good, the Bad and the Ugly.

Thinking about this, I realize that this idol worship is perhaps a bit strange, because I’m not a big movie fan and have never been known as an especially macho, testosterone-driven sort of guy. I’ve never possessed the sort of virtues – such as bravery and strength of character – that are the hallmark of the imaginary characters Clint portrays.

Quite the contrary, I tend to weep rather too easily when presented with emergency situations, like when somebody has pinched the last chocolate truffle from the box I’d hidden behind the couch, or my favourite Italian restaurant has sold out of vintage Barolo. One time, when a propane tank at one of those outdoor hot dog stalls began to rupture and throw flames in the air, my initial reaction was to grab a senior citizen who was passing by and use her as a human shield. Although I must say she displayed very little sense of humour, she did escape practically unharmed.

A few years ago, after my wife had convinced me to take her to that horror film The Blair Witch Project, I was so frightened by the experience that I refused to go to sleep that night without the bedroom light on, and I haven’t been camping since. As far as self-discipline goes, though, I do sometimes defer the moment of orgasm by visualizing Jean Chretien in a thong, so I suppose that is something.

Nevertheless, like a great many men of my generation, I have been known to stand in front of a mirror from time to time and practice my steely-eyed gaze. I tuck my General Electric hair dryer in the sash of my plush purple bathrobe, and say things like “Go ahead, make my day.” In deference to my wife’s somewhat unreasonable sensitivity to social norms, I have now agreed to only do this sort of thing in the privacy of our own home.

There is something about Clint that appeals to the primal alpha male buried deep inside of me, in a way that Steven Segal, Vin Diesel or Tommy Lee never could. Perhaps it’s the fact that he was man enough to share the screen with a monkey. Whatever the case – good on ya, Clint. You the man.