Articles
The Voice
Gimme Gimme: A Prayer From the Dying

I want the good things in life. I want to feel sexy. I want to feel that high that I get when I buy something that my friends want too. I want convenience. I want to buy goods and services so I’ll be treated with respect. I want access to information twenty-four seven. I want things to be cheap and easy, especially food. I want to be entertained without having to think too hard. I want a steady bombardment of things that will keep me from feeling bored. I want classic rock, Vanilla Coke and Ben and Jerry’s. I want to stay young forever. I want to indulge myself because I’m worth it. I want things that fall apart as soon as I buy them. I want television shows that treat me as though I’m an imbecile. I want my children to develop secondary sex characteristics as young as two or three years old due to all of the hormones added to the food they trust me to feed them. I want to feel good about myself by believing that I’m smarter and harder working than the welfare mother who can’t afford to feed her children. I want to soothe my fears by believing that people live on the streets and beg for money because they are lazy and they want to. I want to see the people around me ravaged by cancer caused by environmental pollutants, food additives and cigarettes. I want newspapers, television shows and magazines to cause me to live in a perpetual state of fear of people who don’t have the same values as me. I want these supposed personal values to be constructed for me by those same newspapers, television shows and magazines. If somebody gets murdered in Alabama, or a child is abducted in New Brunswick, I want those same media organizations to turn the pain of the victims into mindless dinner hour entertainment for me, just another opportunity to shill motor oil or computer equipment. I want to talk about how spiritual I am because I went to see U2. I want the air that my children breathe to one day resemble the toxic atmosphere on the surface of Venus. I want to feel sexy forever and ever. I want to be protected from true knowledge, such as the knowledge about what my lifestyle really costs. I want nearly every item I buy to be made by children working twelve to fifteen hours a day for subsistence wages in a third world country. I want the gap between the rich and poor to grow wider each and every year. I want to feel sexy and young — until the day I die. 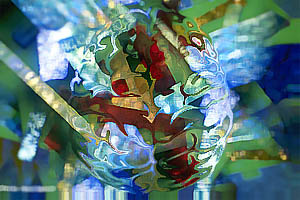 HERE’S THE THING – An Introduction to Me, My Creative Genius and My Bisexuality